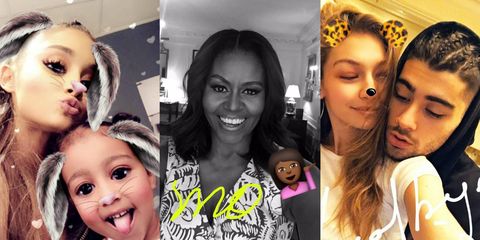 Maybe you don't care about celebrities and you only use Snapchat to play with filters and stalk your younger brother's drunken antics. That's fine. But perhaps your ardent no-celebrities-on-my-Snapchat stance is simply because you aren't following the right accounts.

She's Chrissy Teigen, dammit. Do it for the cooking snaps, the cute baby (hi, Luna!), and for the heavenly moments with her husband John Legend.

Spencer Pratt literally chronicles his entire life on Snapchat. So if you miss his iconic presence on The Hills, this is your jam.

If Spencer isn't your jam, allow us to present an alternative Pratt.

Obviously, Ariana Grande is extremely on board with all the animal filters Snapchat has to offer. And sometimes North West makes appearances on her feed, so what's not to love?

All the (very weird) skincare secrets you never knew you needed.

Who wouldn't want a glimpse into our former FLOTUS' life?

Come for Gigi, stay for Zayn.

One word: FOMO. (Okay, that's an acronym not a word, but still.)

Sorry, but you knew this was coming. Following Kylie on Snapchat is basically a requirement of using the app. We're in this together. Crotch air-drying in a CVS bathroom and all.

Still on point, even without the Taylor Swift sightings.

Leto's Snapchats are like artistic cries for help. Yeah, sometimes they're vaguely terrifying, but it's all in good fun.

Prepare yourself for lots of cocktail snaps. (FYI, we're mostly like Chrissy with a dash of Gigi, and we're just as weird as Jared Leto. Well, maybe not quite.)

Rosa Heyman Deputy Editor As Cosmopolitan’s deputy editor, Rosa Heyman oversees a team of whip-smart editors and hilarious writers who bring you some of the best investigations on the internet, from dissecting the latest Kardashian drama to uncovering the link between white supremacy and misogyny.
Mehera Bonner Contributor Mehera Bonner is a news writer who focuses on celebrities and royals—follow her on Instagram.
Advertisement - Continue Reading Below
More From Celebrity
Kate and Meghan Are Glowing In Massimo Dutti
The Jonas Brothers Remade a Scene from 'Camp Rock'
Advertisement - Continue Reading Below
Harry Doesn't Want 'The Crown' to Cover His Life
Meghan's Emotional Visit to a London Dog Shelter
Taylor Swift's Mom, Andrea, Has a Brain Tumor
Kate Wore a Great Chevron Blouse to UK Event
Brad Pitt and Jennifer Aniston's Pics, Analyzed
58 Celebrities Who Hated Their Roles
Prince Harry Grins as He Returns to Canada
Meghan Markle Went on a Hike With Archie