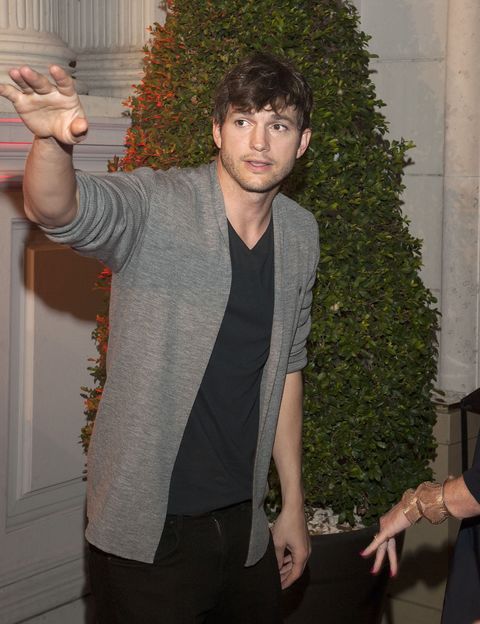 In a new dispatch from the Kutcher-Kunis household, we learn that things are not always whip/nae nae-y there—not when there are ontological discussions about the Easter Bunny to be had.

During an appearance on Jimmy Kimmel, the fun dad discussed how difficult it is to explain leporine mythical figures to 17-month-olds without getting too deep into biology and Christianity and what marshmallow Peeps have anything to do with the Resurrection. Tough job, considering how little Wyatt's already putting up a fight against not being allowed to eat Cinnamon Toast Crunch yet.

"I'm trying to negotiate with her, but it was like a Republican debate," he said. "Like I'm trying to say rational stuff, and she's yelling like Donald Trump. And I'm like, 'This isn't going to work.' We couldn't get on the same page."

Maybe it's like what David Sedaris wrote—you just have to have faith. Or something.

Chelsea Peng I'm Chelsea Peng, the assistant editor at MarieClaire.com.
This content is created and maintained by a third party, and imported onto this page to help users provide their email addresses. You may be able to find more information about this and similar content at piano.io
Advertisement - Continue Reading Below
More From Celebrity
Will & Kate Welcomed Harry Back Into Their Group
Queen Left a Handwritten Note on Philip's Coffin
Advertisement - Continue Reading Below
The Queen Said Grief Is the Price We Pay for Love
All of the Photos from Prince Philip's Funeral
The Queen Wore This Brooch to Philip's Funeral
Kate Middleton's Nod to Diana at Philip's Funeral
Queen Elizabeth Appears at Prince Philip's Funeral
Harry Back With Will & Kate at Philip's Funeral
How Prince Harry and Meghan Honored Philip Today
40 Celeb Exes Who Worked Together After a Breakup