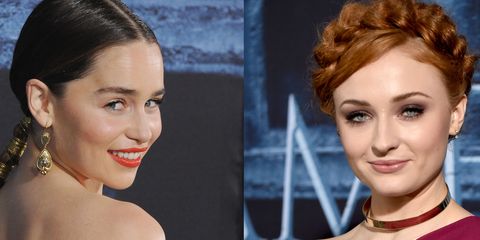 Jon Snow is dead, so frankly our feelings on Game of Thrones are somewhat riddled with ennui. But that aside, the show's premiere took place on Sunday night, and Emilia Clarke and Sophie Turner hit a collective hair home run with a crown braid, a wrapped ponytail, and some general slayage.

Clarke worked with hairstylist Adir Abergel, who gave her ombré extensions styled in a sleek, low ponytail. The look was sectioned into segments thanks to wrapped gold wire, which gave it a distinctly GOT feel. Like, this is a dragon-approved ponytail, no question.

Meanwhile, Turner had her hair styled in a crown braid by Christian Wood, which we're going to interpret as a sign she'll be on the iron throne by the end of the season. Cool? Cool.

P.S. This photo probably best sums up our feelings on Turner and Clarke's hair.