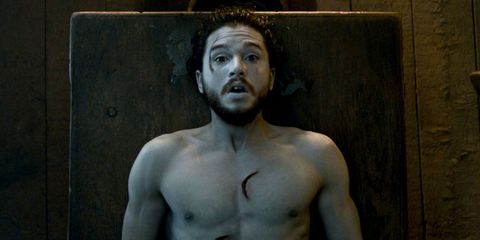 Remember when HBO was all "Jon Snow is dead," and the internet was like "whatever you say 'HBO' if that's even you're real name." Well, he's definitely alive, or at the very least a zombie returned from the beyond to slay us with his emo feelings.

^ Not to be confused with similar footage of us waking up to the smell of pancakes.

In case you didn't catch Sunday's episode of Game of Thrones, Jon Snow was brought back to life by Melisandre, which means Kit Harington has been lying this entire time. Explain yourself, sir.

"Sorry. I'd like to say sorry for lying to everyone," Harington tells Entertainment Weekly. "I'm glad that people were upset that he died. I think my biggest fear was that people were not going to care. Or it would just be, 'Fine, Jon Snow's dead.' But it seems like people had a, similar to the Red Wedding episode, kind of grief about it. Which means something I'm doing—or the show is doing—is right."

Cool, cool, all is forgiven—but question: is it too late to re-animate Ned Stark's decapitated head, y/n?

Mehera Bonner Contributor Mehera Bonner is a news writer who focuses on celebrities and royals—follow her on Instagram.
Advertisement - Continue Reading Below
More From Celebrity
The Most Iconic Weddings Throughout History
Harry Feels "Overwhelming" Guilt Away From Family
Advertisement - Continue Reading Below
Meghan's Son Archie Loves Doing FaceTime Playdates
Cody Embarrassed Miley By Reading Her a Love Poem
Kendall Said Kourtney's Breakup Damaged Her
Ryan Reynolds' Response to an IG Fitness Challenge
Rare Photos of Queen Elizabeth Through the Years
Meghan Might Have to Sponsor Harry's Visa
Philip & The Queen Reunite After 2 Years Apart
How Meghan Markle's Son Archie Is Doing in LA