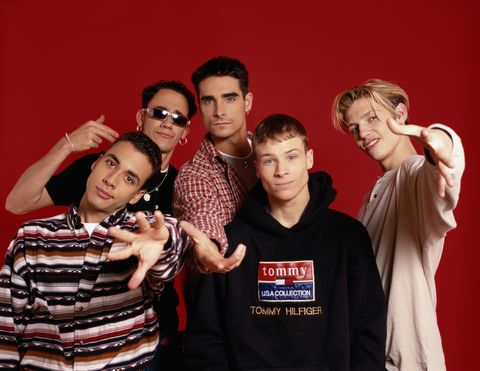 Everybody rock your body, because Backstreet's back, alright! Though, did they ever really leave? Apparently not.

Because they're the gift that keeps on giving, the '90s boy band took it to Instagram to announce their impending album, and guys? It's out this August. Just two months from now!

The band hasn't released music sine 2013's In a World Like This (anyone? anyone?), but they recently gifted humanity a Zombie Western, so really, we should have seen this coming.

By the way, please note that Brian Littrell used the acronym FGL in his Instagram caption. This could be a reference to musical duo Florida Georgia Line, which could therefore mean that BSB is going country. Is this is the best thing to happen to our collective lives? Rhetorical question, becuase absolutely.

Get ready for this, but with cowboy hats:

Mehera Bonner Contributor Mehera Bonner is a news writer who focuses on celebrities and royals—follow her on Instagram.
Advertisement - Continue Reading Below
More From Celebrity
Brad Pitt and Jennifer Aniston's Pics, Analyzed
58 Celebrities Who Hated Their Roles
Advertisement - Continue Reading Below
Prince Harry Grins as He Returns to Canada
Meghan Markle Went on a Hike With Archie
Serena Williams Fully Shut Down a Meghan Question
Camilla's Asked Whether She'll Miss the Sussexes
Harry's Speech Sounds Just Like Diana's in 1993
The Queen Is "Very Sad" About Archie Moving
Kim Kardashian Wants to Open Her Own Law Firm
Harry & William Ended Their Feud With Secret Talks