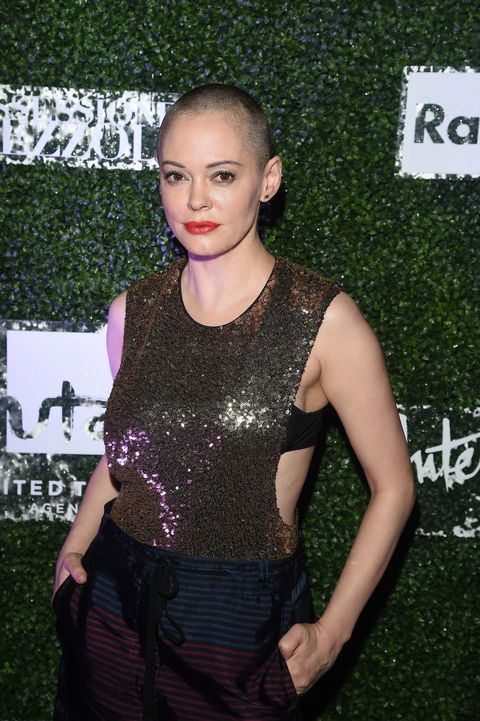 In a piece written by new Variety film critic Owen Gleiberman titled "Renee Zellweger: If She No Longer Looks Like Herself Has She Become a Different Actress?", Gleiberman uses Zellweger as a jumping-off point from which to discuss plastic surgery in Hollywood. Except, you know, he uses lines like this to justify his "critique": "Zellweger, with pillowy cheeks and quizzically pursed lips and that singular squint, was beautiful, but not in the way that a Nicole Kidman or a Julia Roberts was" and "Zellweger was no flash in the pan" and "It may sound like I'm being patronizing," to which, yeah you *do* sound like that, Gleiberman. I'll give you that one.

And with 256 comments on the article alone (most to the tune of "are you serious?" ), it's got some readers frustrated—including Rose McGowan. The actress-turned-activist-and-filmmaker took her thoughts to The Hollywood Reporter, and she doesn't miss a beat:

McGowan goes on to replace the entire article with men's names, to point out the inherently sexist and privileged take on Zellweger's appearance. She ends with: "You are simply a bully on semiglossy paper."

Samantha Leal Senior Web Editor I'm Sam, the senior editor at MarieClaire.com.
This content is created and maintained by a third party, and imported onto this page to help users provide their email addresses. You may be able to find more information about this and similar content at piano.io
Advertisement - Continue Reading Below
More From Celebrity
Who Is Alexandria Ocasio-Cortez's Partner?
Did Charles, Harry, and William Mend Relationship?
Advertisement - Continue Reading Below
The Kardashians' Most Body-Confident Nude Shoots
Chrissy Teigen + Meghan Markle Spoke About Loss
Prince Harry Is Back in Cali With Meghan
Lizzo Just Shared an Unedited Naked Selfie
Queen Elizabeth's Stationery Breaks Tradition
The Queen Shares an Emotional Birthday Message
Chloe From 'Too Hot to Handle' Is in 'The Circle'
Comparing the Two Biggest Royal Weddings