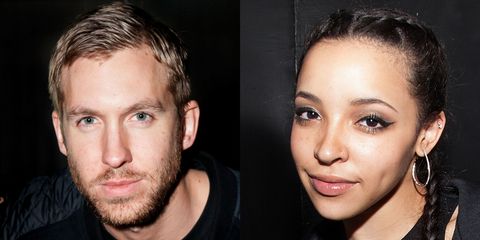 The #Rise of Hiddleswift has given everyone a lot of feelings, and by "everyone," we mostly mean Calvin Harris. But between defending himself on Twitter and living that yacht life, it appears as though Harris has found love in a hopeless place.

According to Page Six, the DJ is currently dating his friend Tinashe. (They met after working together in 2014.)

"They have been seeing each other on the DL," a source says. "It's only been weeks, so it's still pretty casual right now. They've been on a few dates."

Innnnteresting, but let's keep in mind that reps for the Harris and Tinashe did not comment on their relationship, which means it's either nonexistent or not something they're willing to go public with. Then again, they were spotted at Nobu Malibu.

Listen to Tinashe talking about the way into Calvin Harris' heart below:

Mehera Bonner Contributor Mehera Bonner is a news writer who focuses on celebrities and royals.
This content is created and maintained by a third party, and imported onto this page to help users provide their email addresses. You may be able to find more information about this and similar content at piano.io
Advertisement - Continue Reading Below
More From Celebrity
J.Lo "Likes" Shady IG Post After A-Rod Split 👀
Beyoncé Shares Photos of Her White Power Suit
Advertisement - Continue Reading Below
Will & Kate Welcomed Harry Back Into Their Group
Queen Left a Handwritten Note on Philip's Coffin
The Queen Said Grief Is the Price We Pay for Love
All of the Photos from Prince Philip's Funeral
The Queen Wore This Brooch to Philip's Funeral
Kate Middleton's Nod to Diana at Philip's Funeral
Queen Elizabeth Appears at Prince Philip's Funeral
Harry Back With Will & Kate at Philip's Funeral