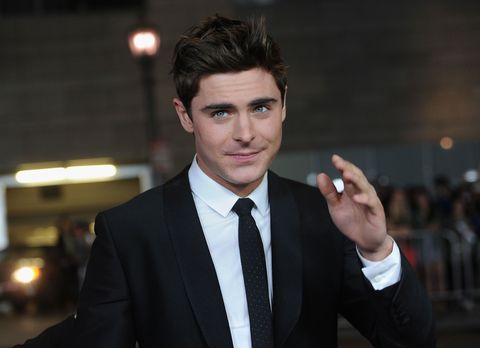 Zac Efron is single and ready to mingle, but tragically no one wants to mingle with him. Not even on Tinder, where you'd think a man like Zac would be aggressively right-swiped. Just look at him...what's not to love?

"Dating is something I'll never be able to do," Zac (who recently broke up with designer Sami Miro) told The Times. "As in the dictionary definition of dating, because one way or another I've impacted that person's life and they'll soon realize it...A date has to be very long to dispel whatever people think of me."

Fair enough, because clearly anyone on a date with Zac Efron would spend at least the first thirty minutes forcing him to recreate the angry dance from High School Musical.

"Amazingly, when I signed up for Tinder, nobody swiped me," Zac continued. "They thought [my profile] was fake."

That truly is amazing, but again—fair enough. In a world where every other Tinder profile is fake, how's a girl supposed to know which Zac is real?

Mehera Bonner Contributor Mehera Bonner is a news writer who focuses on celebrities and royals—follow her on Instagram.
This content is created and maintained by a third party, and imported onto this page to help users provide their email addresses. You may be able to find more information about this and similar content at piano.io
Advertisement - Continue Reading Below
More From Celebrity
Kate Middleton Wore a Playful Fall Look
Halle Berry Stuns in a Backless Swimsuit
Advertisement - Continue Reading Below
The Best Celebrity Halloween Costumes of All Time
'Friends' Will Be Reimagined With All-Black Cast
Katie Holmes and Emilio Vitolo Held Hands in NYC
Yara Shahidi's "Voter" Barbie Doll Is Re-Released
How the Queen Triggered the Sussexes' Departure
Jennifer Lopez Debuts a Short Curly Bob
Hilary Duff's Husband Got a "Hilary" Butt Tattoo
Prince Harry Supports the Gurkha Welfare Trust