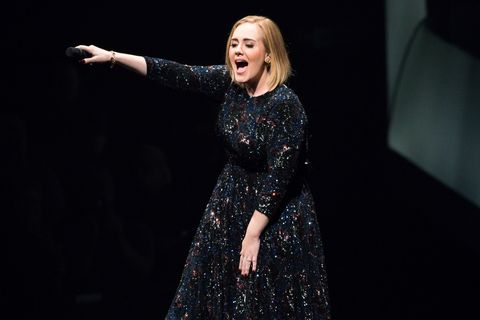 Adele was just having a typical night, minding her own business and slaying at a sold-out arena (as one does), when she decided to bring a lucky fan on stage to sing with her. The catch? Said fan was Jamie-Grace, a Georgia-based singer who was nominated for a Best Contemporary Christian Song Grammy in 2012. So yes, she brought her A+ game. And yes, Adele was blown away.

Jamie-Grace uploaded a video to her Facebook page that her thrilled friends captured, which we have a feeling is going to get a whole new slew of followers. Watch her sing Adele's "Remedy," as well as "Can't Help Falling in Love" while a flabbergasted Adele looks on.

Jamie-Grace later hit Facebook Live to chat about the experience, saying "Adele is going around the B-stage, leaning over so everyone can take selfies with her. It's so sweet, very interactive moment of the show. 18,000 people in this arena, and she's taking minutes to interact with fans...I don't remember my exact wording, but I looked at her, and in more or less words, I said 'do you wanna sing together.'"

Of all the sweet/weird/funny/amazing things that have gone down at Adele concerts recently, this might be the best.