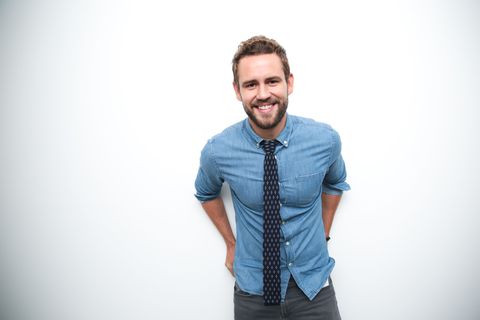 After months of speculation that had the nation on the edge of its seat (Right guys? Right?!), ABC announced that Nick Viall will be America's next Bachelor, and there's so much to talk about. So let's get started! First, a little about 35-year-old Nick, everyone's favorite career Bachelor contestant:

1. He began his reality TV stardom during Andi Dorfman's season of The Bachelorette, and lost in the final moments to Josh Murray, his current-and-forever nemesis. More on that drama in a minute.

2. He tried his hand at televised love once again during Kaitlyn Bristowe's season of The Bachelorette, and made it all the way to the final two only to get rejected in favor of living Ken doll Shawn Booth.

3. He's on the current season of Bachelor in Paradise, ABC's campy (and hilariously meta) spin-off show. He was dating Jen Saviano as of yesterday's episode, so we're assuming that relationship didn't work out.

With the above in mind, you'd think the world would be thrilled that Nick's been given yet another chance to find love, right? Yes...and no. There's zero doubt that this erstwhile Bachelor alum is in desperate need of a girlfriend, but he's had a few iffy moments that warrant further discussion.

I've spent way too much of my life watching Nick Viall on television.

Somehow Nick Viall is still going to come in 2nd place on his own season of #TheBachelor, right?

Social media side-eyes aside, if Nick taps into his controversial past in the right way, he could potentially give The Bachelor a sex-positive re-vamp.* Fingers crossed.