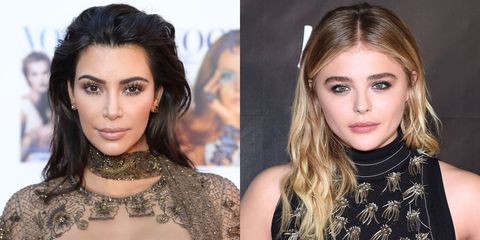 Look, we know it's hard to focus on feuds other than Kim Kardashian and Taylor Swift's, but all celebrity drama is created equal—which brings us to Chloë Grace Moretz. The Neighbors star still has a lot of feelings about The Wife of Pablo, and now she's bringing presidential candidate Hillary Clinton into it.

In case you need a pop culture refresher, Chloë and Kim began their feud after Mrs. West posted a naked selfie to social.

@KimKardashian I truly hope you realize how important setting goals are for young women, teaching them we have so much more to offer than-

"I think I gave my attention to people who don't deserve my attention," Moretz recently told The Hollywood Reporter when asked about the tweets. "In some ways I think I regret giving them the attention, [though] I don't regret what I said."

The actress went on to casually muse that Hillary Clinton inspired her not to care about the following Kim clap back:

let's all welcome @ChloeGMoretz to twitter, since no one knows who she is. your nylon cover is cute boo

"I realized that being the most opinionated and loud person in the room is not always the most impactful. I learned that from Hillary," she said. "'It's great to be feisty.' Those were her exact words. But sometimes the smartest way to get into the psyche of people is to be the quietest person in the room. Let everyone else bicker and throw their words around and then you come in with the quiet voice and that will be the most impactful."

I got my selfie!!! I really loved hearing her speak & hearing her goals for our country! #HillaryForPresident