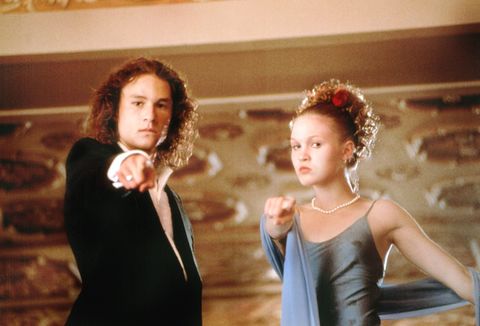 10 Things I Hate About You is inarguably one of the best teen movies of all time, largely thanks to Heath Ledger's memorable performance as hunky outcast Patrick Verona, a mysterious dreamboat who spent his free time doing this:

Gabrielle Union worked with Ledger on the film, and apparently he was just as dashing, sweet, and genuine in real life as he was on screen. The actress described him as "great, warm, [and] funny" during an appearance on Watch What Happens Live, and revealed that he was way older than his years. "He was just this mysterious 19-year-old," she said, explaining that he used to invite the cast to drink with him at the hotel bar. "He's 19, but he's got like a dad drink."

Watch the below clip for more of Union's memories of Ledger, including the revelation that he was dating a 38-year-old at the time 10 Things was made. 😳

Mehera Bonner Contributor Mehera Bonner is a news writer who focuses on celebrities and royals—follow her on Instagram.
Advertisement - Continue Reading Below
More From Celebrity
Selena Gomez Opens Up About Being Bipolar
Harry and Meghan Gushed About California Last Year
Advertisement - Continue Reading Below
The Most Iconic Weddings Throughout History
Harry Feels "Overwhelming" Guilt Away From Family
Meghan's Son Archie Loves Doing FaceTime Playdates
Cody Embarrassed Miley By Reading Her a Love Poem
Kendall Said Kourtney's Breakup Damaged Her
Ryan Reynolds' Response to an IG Fitness Challenge
Rare Photos of Queen Elizabeth Through the Years
Meghan Might Have to Sponsor Harry's Visa