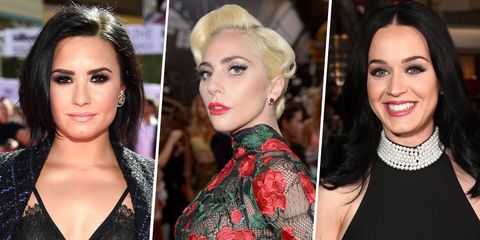 The 2017 Grammy Awards air on February 12, and expect big things because the lineup is on 👌. While the Grammy Powers That Be haven't confirmed every performing celebrity (praying for Queen Bey), here's who we know will be there:

This is Mars' second year performing at the Grammy Awards. He's also nominated for Album of the Year, and for his work on Adele's 25.

La La Land star John Legend will take the stage—though it's unclear whether he'll perform a song from his hit movie or his new release "Love Me Now."

Speaking of Adele, the chanteuse will deliver her fourth Grammy performance (presumably songs from 25), and also potentially take home some wins. She's nominated for Record of the Year and Song of the Year, among others.

Apparently the band has "something very unique and special planned for this celebratory night."

Perry and the Recording Academy confirmed on Twitter that she will be performing at the Grammy Awards. Since Perry is one half of the cutest couple in Hollywood, does this mean we'll see Orlando Bloom too?! Only time will tell.

Just a week after her amazing Super Bowl Halftime Show, Gaga will take the stage again at the Grammys. But she won't be alone: Gaga will be performing with Metallica, who as we previously reported has "something very unique and special planned."

Lovato will team up with Andra Day, Tori Kelly, and Little Big Town for a special performance to honor the Bee Gees, Access Hollywood reports. Lovato is also nominated for Best Pop Vocal Album at this year's Grammy Awards.

She might be pregnant with twins, but that won't stop Queen Bey from performing at the Grammy Awards. The icon was spotted rehearsing, and chances are her set will be epic.

The Grammy Awards (hosted by James Corden) air February 12 at 8 p.m. on CBS.