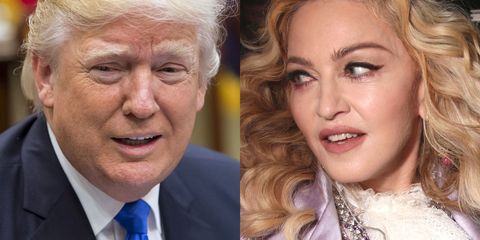 On January 21, Madonna joined millions of protesters during the Women's March, where she gave a pretty rousing (and expletive-heavy) speech about Donald Trump. And yes, he watched it. And no, he was not thrilled.

The president, who has a history of defensiveness, reacted strongly (read: inappropriately) to Madonna's comments during an interview with Sean Hannity, saying, "Honestly, she's disgusting. I think she hurt herself very badly. I think she hurt that whole cause...I thought what she said was disgraceful to our country."

Trump is referring to Madonna's comment that she had considered "blowing up the White House." She since clarified on Instagram (saying she doesn't promote violence), and then made her account private.

Other celebrities have also criticized Madonna (including Cyndi Lauper who said "I don't think it served our purpose because anger is not better than clarity and humanity"), but only President Donald Trump has called her "disgusting."

He also criticized SNL writer Katy Rich's controversial tweet about his son, saying "For them to attack, for NBC to attack my 10-year-old son, it's a disgrace. He's a great boy and it's not an easy thing for him. Believe me."

Valid point re: Barron, but it's disheartening that Trump would spend an interview airing his personal grievances instead of talking exclusively about his plans for our country.

Mehera Bonner Contributor Mehera Bonner is a news writer who focuses on celebrities and royals.
This content is created and maintained by a third party, and imported onto this page to help users provide their email addresses. You may be able to find more information about this and similar content at piano.io
Advertisement - Continue Reading Below
More From Celebrity
Queen Left a Handwritten Note on Philip's Coffin
The Queen Said Grief Is the Price We Pay for Love
Advertisement - Continue Reading Below
All of the Photos from Prince Philip's Funeral
The Queen Wore This Brooch to Philip's Funeral
Kate Middleton's Nod to Diana at Philip's Funeral
Queen Elizabeth Appears at Prince Philip's Funeral
Harry Back With Will & Kate at Philip's Funeral
How Prince Harry and Meghan Honored Philip Today
40 Celeb Exes Who Worked Together After a Breakup
Iconic Party Photos From the Past