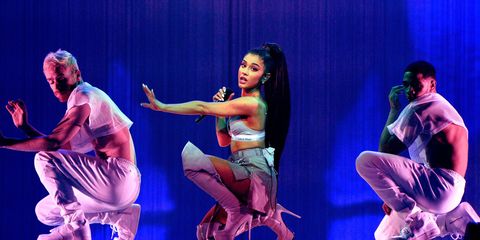 According to a new report by TMZ, Ariana Grande is planning a return to Manchester in the UK very soon. Her concert, on Monday May 22, at Manchester Arena, ended in tragedy when 22 people were killed by a suicide bomber. Now, Grande, might fly back to England for a tribute gig in honor of victims of the attack, and their families.

On Friday, Grande shared an Instagram post, honoring her beloved fans, and all those affected by the devastating events of Monday night. In the statement, the singer said, "I'll be returning to the incredibly brave city of Manchester to spend time with my fans and to have a benefit concert in honor of and to raise money for the victims and their families." TMZ allege that this might happen as soon as next weekend.

TMZ quote a source as confirming that Grande will "headline a huge concert in the city a week from Sunday." The performer is clearly committed to supporting everyone that was impacted by the attack, and wants to help her fans in any way she can.