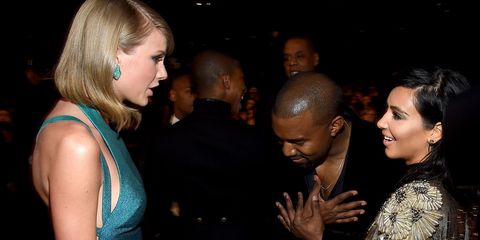 In an appearance on Watch What Happens Live with Andy Cohen on May 28, Kim Kardashian revealed that she hasn't spoken to Taylor Swift since the famed Snapchat incident happened.

Way back in July 2016, Kardashian famously shared video footage of Kanye West calling Swift to inform her about lyrics he'd written about her in his song "Famous". However, Swift was never given the chance to approve West's lyric calling her a bitch, and she also never gave Kardashian approval to record their conversation.

When asked on Sunday's Watch What Happens Live if she was in touch with Swift, Kardashian shook her head.

It's unsurprising that Kardashian and Swift no longer talk, particularly as the Red singer has been lying low in the wake of scandals like the one involving Kardashian and West.

As for whether Kendall Jenner and Swift are still tight, Kardashian revealed, "I don't know if Kendall was a part of her squad. I don't think she was. Yeah, so, I don't think it was awkward." It sounds as though the Kardashians have officially severed any ties they ever had with Swift.

Amy Mackelden Amy Mackelden is a freelance writer, editor, and disability activist.
This content is created and maintained by a third party, and imported onto this page to help users provide their email addresses. You may be able to find more information about this and similar content at piano.io
Advertisement - Continue Reading Below
More From Celebrity
The Queen Took a Pic of Philip With Her to Funeral
The Queen's Tolerance Was the Key to Her Marriage
Advertisement - Continue Reading Below
J.Lo "Likes" Shady IG Post After A-Rod Split 👀
Beyoncé Shares Photos of Her White Power Suit
Will & Kate Welcomed Harry Back Into Their Group
Queen Left a Handwritten Note on Philip's Coffin
The Queen Said Grief Is the Price We Pay for Love
All of the Photos from Prince Philip's Funeral
The Queen Wore This Brooch to Philip's Funeral
Kate Middleton's Nod to Diana at Philip's Funeral