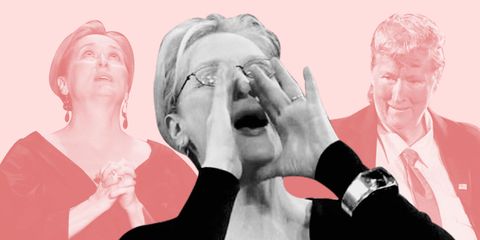 On this day in history, Ma and Pa Streep blessed us with a daughter named Meryl, who, 68 years later, would be regarded as one of the last bastions of happiness and goodness in the godforsaken summer of 2017. Here are some reasons we don't deserve her but are extremely pleased she is here.

Did you for a minute think this would *not* be number one? Although the photo/GIF is from the 2016 SAGs, the internet did what it does best, which is revive old stuff and add pop-culture elements to it so that we might feel the Human Experience, AKA like we are all in this together. (This is what it means to be civilized.) Meryl gave this to us, so thank you for that.

Something else she bestowed upon mankind was this her Cecil B. Demille Award acceptance speech at the most recent Oscars, in which she exposed Trump for what he is (a bully) without even naming him, paid her respects to the late Carrie Fisher, and lobbied for freedom of the press. That she accomplished all this in so few words only speaks to her brilliance as an orator—and a person.

Still want President Streep to be a real thing. Save us, Meryl.

An Example of How the Definition of "Celebrity" Might Evolve

For good! Not asking the whole of Hollywood to send letters to every member of Congress urging them to bring back the Equal Rights Amendment, but also not *not* asking them to do that.

Which is a monologue, to be more precise, but whatever—iconic.