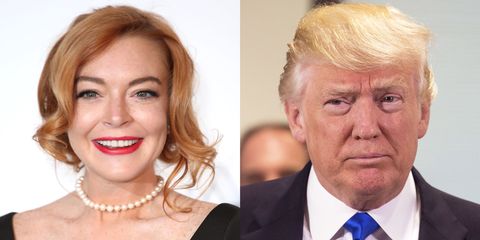 Lindsay Lohan took to Twitter this Fourth of July to defend Donald Trump, according to the Hollywood Reporter.

Lohan responded to a tweet by another user, which included a screenshot of a Breitbart article and praised Trump for supporting the parents of Charlie Gard, a British infant born with a rare genetic disease. The tweet also mentioned Trump's now-infamous tweet including a GIF of him beating up the CNN logo.

In a response to the tweet, Lohan wrote, "THIS IS our president. Stop #bullying him & start trusting him. Thank you personally for supporting #THEUSA."

She also tweeted in support of the entire First Family, writing that they are all "kind people."

It's worth noting that Trump has also spoken out about Lohan. In a 2004 interview with Howard Stern, he said, "She's probably deeply troubled and therefore great in bed. How come the deeply troubled women, you know, deeply, deeply troubled, they're always the best in bed?"

When asked about the quote this January, Lohan said, "I wish him the best. We live in a world of societies that consistently find fault in people. I think it's a really scary factor. Taking someone else down is never the answer, and I think we all know that."

Kayleigh Roberts Kayleigh Roberts is the weekend editor at Marie Claire, covering celebrity and entertainment news, from actual royals like Kate Middleton and Meghan Markle to Hollywood royalty, like Katie Holmes and Chrissy Teigen.
This content is created and maintained by a third party, and imported onto this page to help users provide their email addresses. You may be able to find more information about this and similar content at piano.io
Advertisement - Continue Reading Below
More From Celebrity
Megan Thee Stallion Stuns With Neon Pink Hair
Phoebe and Pete Wore Matching Initial Necklaces
Advertisement - Continue Reading Below
The Queen to Sit Alone at Prince Philip's Funeral
Royals Announce Who Will Attend Philip's Funeral
Prince Philip Will Not Have a State Funeral
Harry Doesn't Want Drama at Philip's Funeral
How Meghan Feels About Missing Philip's Funeral
Eva Longoria Loves Her Mini Trampoline
The Royals Won't Wear Uniform at Philip's Funeral
Jennifer Lopez and Alex Rodriguez Announce Breakup