Today's Top Stories
1
The Anti-Choice Endgame: Power And Control
2
Suni Lee Just Scooped Up Gold in Tokyo
3
Nordstrom's 2021 Anniversary Sale Is the Best Yet
4
Give Domestic Workers the Protections They Deserve
5
The Absolute Best Red Lipsticks on Earth
Backgrid

When it comes to Bella Thorne and Scott Disick, the world appears to be in a permanent state of ¯\_(ツ)_/¯. First they were spotted "packing on the PDA" at Cannes. Then Bella flew home and shaded The Lord's partying antics. They she appeared in photos with her ex Gregg Sulkin. And then she was seemingly back with Scott. So, what, exactly is going on between them?

Apparently, not that much. 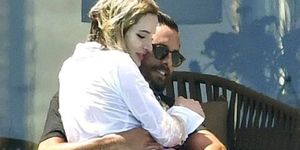 During an interview with Jenny McCarthy, Thorne said "I was never with him sexually." She also threw some shade at Scott's television show, saying: "I've never seen Keeping Up With the Kardashians…I don't follow up with any of that."

That said, she does claim to be friends with Kendall and Kylie Jenner: "I'm very friendly with Kylie and Kendall...as far as I'm know we're [super] chill. I didn't have any problem with them."

Good to know. Also, who else is still confused?

Mehera Bonner Contributor Mehera Bonner is a news writer who focuses on celebrities and royals.
This content is created and maintained by a third party, and imported onto this page to help users provide their email addresses. You may be able to find more information about this and similar content at piano.io
Advertisement - Continue Reading Below
More From Celebrity
A Slice of Diana's Actual Wedding Cake Is For Sale
Matt Damon Trolled Ben Affleck and Jennifer Lopez
Advertisement - Continue Reading Below
This Old Video of the Queen Saying "Nah" Is LOL
Diana Had a Secret Message on Her Wedding Shoes
Will's Friends Made "Jibes" About Kate's Mom
William Will Suffer "Worst" from Harry's Memoir
Simone's Boyfriend Sent Her the Sweetest Message
Harry's Friends Don't Want to Be in His Memoir
Will & Kate's Modern Approach to Raising George
Meet Simone Biles's Super Supportive Parents