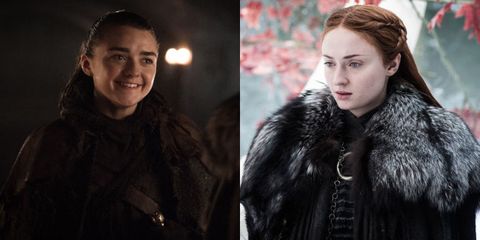 Game of Thrones loves to drop clues about Sansa's future in her clothes and her hair—Sophie Turner has confirmed as much as fans have noticed plenty of clues about her character this season already.

This week, Thrones upped the ante, including clues in both the Stark sisters' hair. Notice how their hair was styled this week. First look at Sansa's pretty braids:

And Arya's very practical half-updo (which is admittedly tough to see in her darkly-lit scenes this week):

Do they look familiar? Think back to Season 1, when the Stark girls' parents were alive:

In her role as Lady of Winterfell, Sansa is looking more and more like her mother, Catelyn, every day. Arya, on the other hand, is taking after her father, Ned, as always.

But what does this mean for the Stark girls? Is it just a symbol of how far they've risen in the ranks of their own family or a terrible hint at what's to come (remember, Ned died for what he believed and Catelyn died for her family)?

Let's hope for the former.