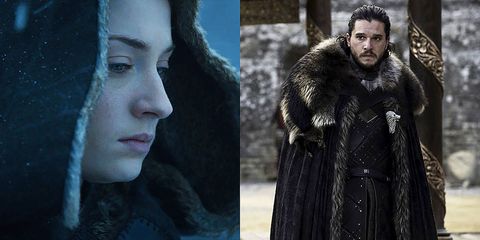 The Game of Thrones Season 7 finale, "The Dragon and the Wolf," finally aired and.... We. Have. Questions. Season 8 cannot come soon enough, but in the meantime:

1. Will this be the last time we see some of these awesome pairings?

Bronn and Pod. The Hound and Brienne. Brienne and Jaime. Bronn and Tyrion. These reunions are giving us flashbacks to happier times. But with the end being so near, these fun moments start to feel like bittersweet goodbyes. No, YOU'RE crying.

2. Why did they put the zombie box down those stairs to begin with?

Did they just really want to drag it out and make the entrance theatrical? I felt so bad watching The Hound haul the giant box up those stairs for no discernible reason. No wonder he lost his temper and kicked it over.

3. When will Cleganebowl happen?

The Hound and The Mountain shared a terse exchange (well, The Hound talked, The Mountain just kind of stared menacingly), but they did not fight. A lot of fans were hoping to see the highly-anticipated Cleganebowl (the big showdown between the brothers) happen this week, but we'll have to wait until next season—at the very least.

4. Why is the show still trying to make Theon Greyjoy happen?

Stop it. Just please, stop it. It would be so much more satisfying if Yara could just save herself. Or if Dany saved her. Or literally anything that involved less Theon.

5. What's going to happen with Jaime?

The biggest cliffhanger that isn't getting a ton of buzz is what's going to happen to Jaime now that he's abandoned Cersei. Will he go join Team Daenerys? Will he stay a lone wolf (erm, lion)? What will he be without his sister? Will he still have to take out the Mad Queen, like fans have predicted for a long time? 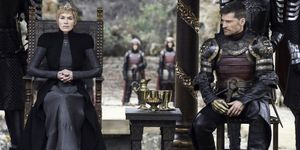 What\'s Next for Jaime Lannister on \'GOT\'?

6. Why didn't Jaime get Bronn to leave King's Landing with him?

7. When did Sansa and Arya realize what Littlefinger was up to?

In the finale, Sansa and Arya teamed up and turned the tables on Littlefinger, who was trying to play them against one another. Fans saw this "twist" coming a mile away and have been predicting it for weeks, even though it didn't really make sense given how the Stark sisters have been acting. Why share that tense moment in Arya's room, with no one watching, if they weren't playing into Littlefinger's hand at least a little?

That begs the question: When did they figure it out? Have they been in on it all along? Was it Littlefinger's advice to Sansa (read: that she imagine the worst reason someone might be doing something) that was his own undoing? Did Bran swoop in and drop magic Greensight knowledge on them? This matters because if Littlefinger did poison their relationship a little, those feelings of resentment and betrayal could come bubbling up again. And if they knew the whole time, then WHY HAVE THAT SCARY, THREATENING CONVERSATION WHEN HE WASN'T WATCHING?

8. Why was Tyrion SO SAD about Jon and Daenerys hooking up?

Jon and Daenerys went all the way this week and Tyrion knows it. In case you forgot (unlikely), Jon showed up at the door to Dany's cabin on the boat they were traveling on, and slipped into her room for some private time. Tyrion witnessed the whole thing go down. The weird part: He looked SO SAD about it. Like, devastated. Why so sad, Tyrion? Is Thrones trying to tell us he's in love with Dany now, too? Is he just worried they'll breakup and ruin the alliance? Or, could something more sinister be at play? 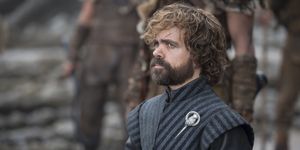 9. Will Jon get Dany pregnant?

Dany is convinced she can't get pregnant again. And when Jon asks her why, she explains that the witch who killed her husband told her. Jon points out that the witch might not have been the best source, and every GOT fan everywhere agreed. So, now that they've consummated their love, will Dany find herself pregnant with her nephew's child?

We know Tormund was at Eastwatch when the Night King and his ice dragon came to demolish that portion of The Wall. We saw him running. We didn't see him dying. But we also didn't get the comforting shot of him definitely not dying.

11. HOW IS ANYONE GOING TO SURVIVE?

Seriously though. The Night King and his White Walker/wight hand have broken through The Wall. The Night King has an ice dragon who can presumably fly him around Westeros really quickly (like, about as quickly as Dany flew to Jon and his friends during "Beyond the Wall"). And, even if the rest of the White Walkers and wights can't keep up, that ice dragon can do a lot of damage on his own—as evidenced by him destroying a large section of The Wall in mere minutes using his powerful ice-fire-lightening breath.