Sean Spicer showed up at the Emmy Awards on Sunday night, and everyone's attitude appeared to be: "LOL, Sean, what a guy!" Which, understandably, drew a lot of criticism from people who haven't forgotten the horrible things he did as press secretary to Donald Trump.

And speaking of criticism, people were especially upset at Late Late Show host James Corden for this photo of him kissing Spicer on the cheek backstage:

If you were ever on the fence about James Corden... allow me to help you decide pic.twitter.com/udxPyFHmrq

James Corden kissed Sean Spicer AND was in the Emoji Movie!? pic.twitter.com/LwncM2D9X3

Now, Corden is apologizing for the kiss. Well, sort of. After joking that "these Hollywood phonies kissing up to Sean Spicer are disgusting," Corden offered a sincere mea culpa for the moment:

"I know you think that is a picture of me kissing Sean Spicer but, in the spirit of Sean Spicer, no it isn't," he joked. "To be fair, everyone was kissing ass last night at the Emmys. I just happened to kiss the biggest one there."

"Understandably, some people have been disappointed by this photo," he continued. "In truth, I'm disappointed by it as well. I am, I've have been reading a lot of harsh comments on Twitter today, and I hear you loud and clear, truly, I do. So much so I'm really starting to regret that Carpool Karaoke that we've taped with Steve Bannon. Feels like a mistake today."

You can watch the apology in full over on CBS, and we'll update this post with a video as soon as one becomes available. 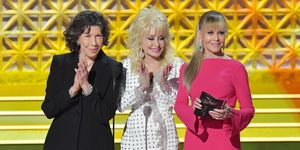 What You Missed from The Emmys Last Night