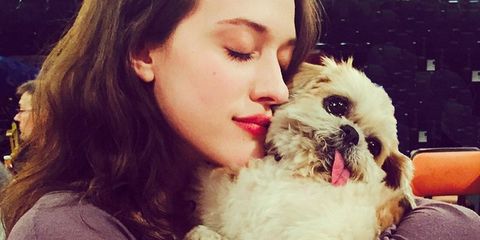 It's National Dog Day, which means there's no time like the present to gawk at celebrities and their ridiculously cute pooches. Here, 26 star-studded reasons to adopt a four-legged sidekick.

It's hard to decide what has a bigger hold on Teigen's heart, John Legend or the couple's pups Puddy, Pippa, and Penny.

Swanepoel doesn't go anywhere without her jack russell Luna—not even the Super Bowl.

Jiff the Pomeranian isn't actually Perry's pup, but the pooch did star in her "Dark Horse" music video.

Fact: Spears' pooch Hannah has more Instagram followers than you.

Lovato and her fluffy dog Buddy are everything.

All Ciara really needs is some TLC from her pups Tyson and Georgia.

We're not exactly sure if this is Jonas' dog, but c'mon they've got the matching eyes and everything.

Moretz gives her little Jaxon a peck on the cheek.

Hayek has over 50 pets, but we like to think her eight dogs are among her favorites.

Okay so Marnie the Dog doesn't technically belong to Dennings, but she might as well because they're such a cute pair.

Cohen and his adopted rescue dog Wacha are two peas in a pod.

Brady lets his pit-bull mix Scooby give him a kiss on the nose. (All the 😩emojis.)

Confirmed: Prince Hilton unsurprisingly has a lot of swag.

We have a crush on Anne V's dog, Anchovy.

Hough's two cavaliers, Lexi and Harley, have got the life.

Rossum takes her pint-sized pup with her everywhere she goes.

Even the couple's black labrador, Widgeon, is regal.

We're as obsessed with Reed's German shepard Enzo as she is.

Even on set, Seyfried loves to share smooches with her dog Flynn.

Ambrosio and her daughter play with their furry, bow-adorned pooch.

The Vampire Diaries star holds his dog Nietzsche during her pregnancy.

Hudgens can't get enough of her silver poodle Shadow.

Gaga likes to call her French bulldog Asia by her nickname "BatPig".

The supermodel's Yorkshire terrier is just so damn cute. 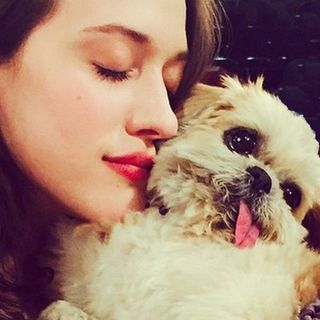