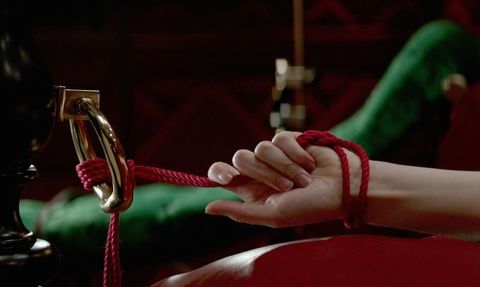 Raiders of the Lost Ark is the pinnacle of blockbuster filmmaking because Steven Spielberg deals in optical illusions: We see high angles, low angles, villain shots, hero shots, punches in close-up, beads of sweat even tighter, then—boom—a danger-filled stunt packed in a wide frame. It's calculated and thrilling.

There aren't car flips, bare-knuckle brawls, or explosions exploding out of explosions in the subdued hit Fifty Shades of Grey, and yet the film's sexual encounters speak the same language as an Indiana Jones movie. Like Raiders, Fifty Shades is a film where the stunts make or break the action's magnetic quality. To believe Christian Grey and Anastasia Steele's relationship is to buy Jamie Dornan and Dakota Johnson in action in the Red Room.

Stubbs likened the sex in Fifty Shades to a coordinated fight scene.

To execute these physically and emotionally involved sequences, Fifty Shades recruited stunt coordinator Melissa Stubbs, whose resume includes The Last Samurai, the X-Men series, stunt-doubling for Angelina Jolie in Mr. and Mrs. Smith, the upcoming Terminator Genisys, and over 25 years executing stunts for jobs big and small. Speaking over the phone from Los Angeles, Stubbs likened the sex in Fifty Shades to a coordinated fight scene, planned and ingrained in the actors' minds.

"It was a lot of work with Sam Taylor-Johnson and the actors, getting to a place where [Jamie Dornan] could play dominant," Stubbs said. "They wanted it to look realistic and keep it true to the book. So my purpose was helping the actors to get there without hurting them. My job description can be anything from a martial arts teacher to rolling a car. This was a completely different thing. It was about helping the actors get to where they needed to go."

Stubbs and the Fifty Shades team spent two weeks researching and developing a layout for Christian's Red Room, learning what accessories their lead character would keep in his home and weighing each item's visual appeal. In a mock Red Room layout, Stubbs became her own Anastasia stand-in, engaging with various setups to see how they would play on screen. The stuntwoman worked with a bondage tech advisor who instructed the production on tools, devices, and ropes used in regular practice. Stubbs and the design team toiled over the simplest knots. "We played with them, [finding] visual ideas for Sam," she said. "If you look at Sam's work as a visual artist and photographer, you'll see interesting images of human art, physical art, of subjects hanging."

There's only so much that a stunt team can fake when a scene requires two bare actors and a series of rough maneuvers. The rack where Christian hangs Anastasia had few modifications, save for some off-camera comforts. The duo's actual "play" couldn't fake contact. Props had to move like real bondage toys to give Taylor-Johnson options in the editing room. Stubbs worked with prop

The whips had rabbit fur tips to avoid hurting Johnson, or leaving a mark on her.

master Dan Sissons to design whips that had soft leather or rabbit fur tips to avoid hurting Johnson, or leaving a mark on her. Takes involving Dornan and Johnson varied from calm to quite violent (a salaciousness that rarely shows its face in the finished film).

Stubbs couldn't laud Johnson's commitment to the Red Room scenes enough. "She was completely naked and vulnerable," said Stubbs. "It's fine if it's an intimate setting with your actor and director, but you have an entire film crew in the room. There were shots where she was flogged, but in the most gentle, controlled manner possible. It was a tough couple of weeks for her."

While the glimpse of a whip provokes audience reactions, many of Fifty Shades' provocative beats were dependent on Dornan and Johnson's performances. Body language was as important as bodily reactions. Stubbs compared a scene in which Dornan crops Johnson to stage combat. "If someone gets punched, we don't actually punch someone," she said. "It's a swing and a miss, but the actor's reaction sells that they were struck." Very little of the sex in Fifty Shades was "blocked," leaving intimate movements up to the actors and their character motivations. Stubbs said that there was pre-shoot training, but it was all in preparation to appear "freestyle," ingraining these behind-closed-doors acts into the actors' repertoire. "My job is not to tell Jamie how to move sexually," she said. "It's his decision and a private one."

As a stunt coordinator, Stubbs was on standby throughout the shoot, a pair of eyes who could step in when a move wasn't working. She could offer alternatives and explanation. "Sometimes you're a fly on the wall and gently point them in the right direction from a character position, from a safety position," she says. Dornan and Johnson's simulated moves had to look convincing, and, even more importantly, they had to be repeatable. Each shot could take four hours.

Despite surface appearances, nothing in the Red Room was as painful for Johnson as it was during one of the film's minor, fully-clothed moments. When she walks into Christian's office for the first time, Anastasia takes a nasty pratfall on to the marble floor—which was completely real. "That's

Each shot could take four hours.

100 percent Dakota and she probably did 23 takes of falling on her face to the ground." Stubbs thought Dakota was anticipating the fall, losing the spontaneity of the gag. The more takes she did, the more mechanical it became. So, knowing Dakota was committed to making it work, Stubbs hid behind the lens, grabbed her foot, and assisted her fall. "It's the little things that can be the most difficult sometimes, and not making things more than they need to be," Stubbs says. "[Dakota] is a trooper. She was fully committed."

Stubbs' contributions to Fifty Shades of Grey are hard to trace. She prides herself on it. A move that went too soft could pull a viewer out of the movie and have them questioning the core relationship. Too hard of a hit sends the movie into camp territory, a movie that's about bondage as opposed to challenged by the lifestyle. Like Spielberg's whirlwind car chases, the sex in Fifty Shades just… happens. And, with the film killing it at the box office, it'll likely happen again. Stubbs says, if production stays the course, cameras will roll on the Fifty Shades sequel.

Why 'Fifty Shades of Grey' Is a Lesson for Men

What Do Guys Really Know About 'Fifty Shades'?

Breaking Down the 'Fifty Shades of Grey' Soundtrack, One Track at a Time