Your favorite '90s show is about to make an official comeback, and it's being written by non other than It screenwriter Gary Dauberman. (Yes, It, the completely terrifying Stephen King film.) 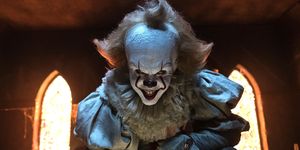 40 Traumatizing Thoughts I Had During 'It'

According to Variety, Paramount Players is adapting Are You Afraid of the Dark? as a film set for release October 2019 (Halloween time...spooky). The hit TV show followed a group of teenagers who refer to themselves as "The Midnight Society," where they tell scary stories and pretty much relive them in the episodes. It also helped launch the career of one of your faves Ryan Gosling.

The Nickelodeon series originally aired from 1992-1996, and had a revival for one season in 1999. If It was any indication, we think this is going to be pretty damn good.