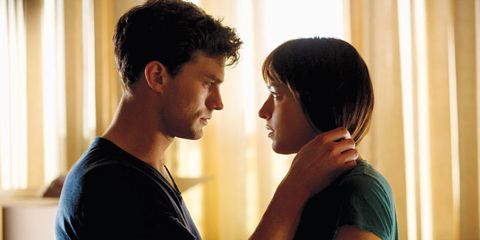 As of Friday, Fifty Shades of Grey will be available on DVD and Blu-ray for your home viewing pleasure (or pain, if you're into that), which means it's time to explore the movie's extra-sexy special features. As promised in all caps on the cover, there is indeed an alternate ending, but — SPOILER ALERT — it's not really going to do much to assuage that sense of "WTF" that many people left the theater with back in February. What, did you think E.L. James was going to let Ana and Christian get back together in a deleted scene? That's not happening till laters, baby. (Specifically in 2017. When Fifty Shades Darker comes out.)

Following the film's original ending, which fades to black after Ana returns her "mean machine" of a laptop and leaves Christian's apartment, the new "unrated" version cuts to a montage set to Jessie Ware's "Say You Love Me." You see Ana crying in various locales — the backseat of Taylor's car, her bed — interspersed with blissful flashbacks to more peaceful times in their relationship. Remember when they rode in that glider and made weird faces? Wasn't that such a nice day?

Then it's time to check in on Christian, who's sitting in Ana's empty room looking wistfully at the toy glider that she left for him with a note reading, "This reminded me of a happy time." Me too, Ana. Me too. Within some unspecified amount of time, Christian mends his sadistic little heart long enough to go back to work, where he has to pretend to hold it together for a Very Important Meeting. He looks so wooden, so sad, and then ... END SCENE. That's all there is. No more sex, no more Rita Ora, no more anything but unadulterated melancholy. So basically, the "alternate" ending is the same as it was before, just with 200 percent more knife-twisting.

As for the rest of the special features, they're your standard behind-the-scenes clips about things like Christian's apartment, E.L. James, and Dakota Johnson and Jamie Dornan. But sadly, no one thought to include a blooper reel, which is really a shame because something hilarious must have happened with that penis bag Jamie kept referencing in interviews. Also missing are any deleted scenes, so if you were hoping that everybody lied and the tampon sex just got left on the cutting room floor, sorry. Today is not your day. There's always the teaser for Darker!

If the (Brutally) Honest 'Fifty Shades' Trailer Doesn't Shatter Your Illusions, Nothing Else Will

Eliza Thompson senior entertainment editor I’m the senior entertainment editor at Cosmopolitan.com, which means my DVR is always 98 percent full.
Advertisement - Continue Reading Below
More From Culture
'Good Girls' Is Back for an Explosive Season 3
Netflix's 'Haunting of Hill House' Will Return
Advertisement - Continue Reading Below
Criminal Minds Season 15 Will Be Its Last
The Hot New Podcasts to Add to Your Queue
Who Are the Women of 'The Bachelor' in 2020?
Join Marie Claire's Virtual Monthly Book Club