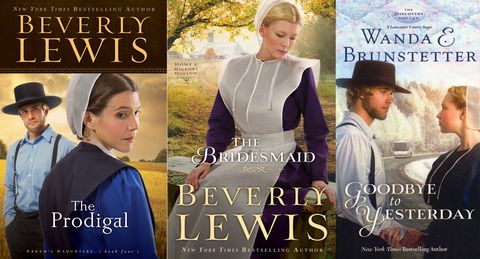 Imagine if E.L. James had gotten lost in the fields of Lancaster County, Pennsylvania, and you have Amish romance novels. Except the whips are only for the horses and "a roll in the hay" is slang for tripping in the barn.

In a market saturated with Fifty Shades of Grey and Danielle Steel imitators, booksellers are making room on their shelves full of bodice-rippers for what have been affectionately dubbed "bonnet-rippers." In the romance novel genre, books with an inspiration and religious theme generate an estimated $720 million in sales a year, according to the Romance Writers of America Association—third only to crime novels (by a slim margin) and erotica, which grossed nearly $1.5 billion in 2014.

The storyline is the same: A young woman searches for lasting love, with a lot of heart-pounding and heartbreak before she finally finds it. But unlike mainstream erotica, these tales of young Anabaptists rely more on implication than explicit detail. (Think: Sex is never mentioned, but a lot of babies show up, and unmarried pairs don't touch—except to rescue each other from fire, flood and buggy accidents. This happens a lot.)

Wanda Brunstetter, one of the first writers of the genre and author of more than 70 novels, explained its appeal to Newsweek: "When people read my books, it takes them to a simpler way of life."

She adds, "Hanging clothes on the line, cooking meals from scratch, turning off the television and mobile phones and just visiting. We've lost that way of life. I think my readers are craving that. Also, the Amish set a precedent for us in that their relationships are based on family, church and community, not just the sexual part of things."

Well, that part's still there. But couples kiss (just kiss) for pages and pages—and then agonize over their transgressions for pages afterward. And like traditional romance, young ladies' cheeks still flush and burn, and they bite their lips. (Though an "inner goddess" would certainly be blasphemy!) Even the not kissing is torment. Beverly Lewis, another Amish fiction superstar, penned this tryst in her book, The Bridesmaid:

"Tears sprang to her eyes as he searched her face, lingering over her brow, her eyes... and then her lips. She couldn't help it; her resolve flew far away, and she longed for his kiss.

A crow cawed loudly over their heads, and just that quick, Joanna shifted slightly, offering her cheek instead of what he's surely prefer. And what she, too, so yearned for. Oh, to know the feel of his lips on her own! When Eben's my husband, I'll know, she reminded herself. We must wait..."

Last year, Lewis and Brunstetter each sold more than 200,000 copies of their books worldwide, according to Nielsen BookScan. And together, both authors have sold nearly 30 million copies since they started writing in the late 1990s. It's worth noting that neither Lewis or Brunstetter are Amish.

But they're definitely filling a niche, especially with women who wouldn't be caught dead with Fifty Shades. As Shannon Marchese, a senior editor at evangelical publisher WaterBrook Multnomah, a division of Penguin Random House, said to Newsweek,"These are readers who love romance but want a clean read they don't have to hide from their kids."

Advertisement - Continue Reading Below
More From Culture
The Best Korean Dramas of All Time
Mainstream Movies With * A LOT * of Nudity
Advertisement - Continue Reading Below
Things Between Victoria F. and Chase Rice Got Ugly
Who Are the Women of 'The Bachelor' in 2020?
Rosalía Is The One To Watch At This Years Grammys
Sydney From the 'Bachelor' Knows Hannah Brown
The 10 Hottest Movies on Hulu Right Now
'The Bachelor' Has Already Finished His Season
When Michelle Carter Is Expected to Walk Free
How Much Time Did Michelle Carter Get in Prison?