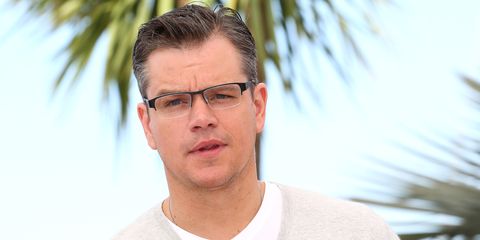 Matt Damon has apologized for his comments about sexual harassment and the #MeToo movement, which drew a slew of well-deserved controversy when he waded into the debate last month.

“I really wish I’d listened a lot more before I weighed in on this,” Damon admitted during an interview on TODAY. “I don’t want to further anybody’s pain with anything that I do or say. So for that I am really sorry. A lot of those women are my dear friends and I love them and respect them and support what they’re doing and want to be a part of that change...but I should get in the back seat and close my mouth for a while.”

During an ABC News interview in December, Damon pointed out that sexual misconduct encompasses "a spectrum of behavior," and made the revolutionary observation that there is "a difference between patting someone on the butt and rape or child molestation."

While he acknowledged that both types of behavior "need to be confronted and eradicated without question, they shouldn't be conflated." In a separate interview with Business Insider, Damon also noted "one thing that's not being talked about is there are a whole shitload of guys—the preponderance of men I've worked with—who don't do this kind of thing and whose lives aren't going to be affected." Because our real priority here should be celebrating the brave men who manage not to sexually abuse women.

Following Damon's comments, a number of people—including Damon's former co-star and ex-girlfriend Minnie Driver—sharply criticized him for failing to recognize that even "minor" incidents of harassment are symptomatic of a much bigger problem. "It's the micro that makes the macro," actress Alyssa Milano wrote in an open letter to Damon on Twitter. "I have been a victim of each component of the sexual assault spectrum of which you speak. They all hurt. And they are all connected to a patriarchy intertwined with normalized, accepted—even welcomed—misogyny."