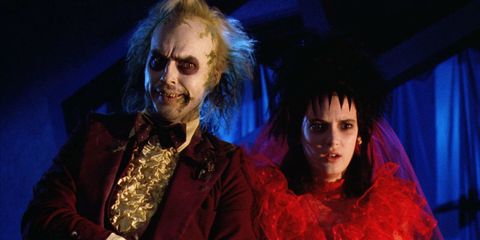 It turns out Michael Keaton and Tim Burton weren't just leading us on: After the actor and director admitted that making a Beetlejuice sequel is just a matter of finding time to work together, original costar Winona Ryder confirmed last night on Late Night with Seth Meyers that it's in the works. Though it doesn't sound like she knows much, she said, "I think I can confirm it because Tim Burton did this interview—like it was very hush-hush top secret—and then he was doing press for Big Eyes and he did an on-camera interview and he said, 'Oh yeah, we're doing it and Winona's gonna be in it.'" We're pretty sure she means this MTV interview in which Burton talked about the plans and says he misses the character. So yeah: More Beetlejuice, and Keaton, Burton, and Ryder will all be involved.

Ryder also revealed that at airports, TSA agents force her to say "Beetlejuice" three times before letting her through. "It's obviously better than getting strip-searched or tasered." Thank you, TSA. You're doing important work.

Paul Schrodt Paul Schrodt is a freelance writer and editor who also contributes to Esquire, GQ, Money, The Wall Street Journal, and more.
This content is created and maintained by a third party, and imported onto this page to help users provide their email addresses. You may be able to find more information about this and similar content at piano.io
Advertisement - Continue Reading Below
More From Culture
'You' Season 3 Is Adding a Menacing Character
'Fate: The Winx Saga' Season 2: Everything We Know
Advertisement - Continue Reading Below
Who Is Michelle Young on 'The Bachelor'?
Who Is the Voice on the Radio in 'WandaVision'?
Everything We Know About Matt James
How to Join Marie Claire's Virtual Book Club
Watch UCLA Gymnast Nia Dennis' Epic Floor Routine
Fans React to 'Euphoria' Special 'Part Two: Jules'
'Detransition, Baby' Is Our Feb Book Club Pick
'The Bachelor' Is Back!