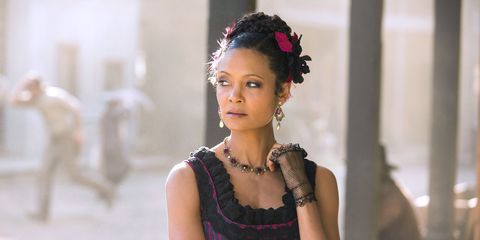 The long-awaited Westworld Season 2 trailer is finally here, and it does not disappoint.

As well as giving us the very first glimpse of ShogunWorld, the other theme park discovered at the end of Season 1, it hints at what's to come in new episodes.

Both Evan Rachel Wood and Thandie Newton feature heavily throughout the new trailer, and an orchestral version of Nirvana’s "Heart-Shaped Box" sets a heavy mood:

Of course, at the end of Season 1, Thandie Newton's Maeve discovered that the Wild West themed park wasn't the only one that existed. She went through a mysterious door marked "SW" which fans assumed stood for Samurai World.

As Entertainment Weekly reported in March 2018, "'Shogun' is a term applied to military commanders in feudal Japan." And the new trailer gives us a brief look at what Shogun World is all about.

This trailer isn't the only footage fans have been shown of Season 2. During the Super Bowl, some brief Westworld clips aired, and they contained a hidden mystery, which was unraveled on Reddit.

As Esquire reports, "33 seconds into the trailer, there are white bars at the top of the screen, which is binary and decodes to 52.89.126.34 which leads to Delos Destinations dot com." Apparently the most important discovery on that secret website is a "slideshow that advertises the six Delos parks that are either active or in development."

While it's undoubtedly good to finally see ShogunWorld and get some insight into what all of our favorite characters do next, it's only the tip of the iceberg. And as Westworld's new trailer proves, there's so much more to discover about the show and its group of parks.