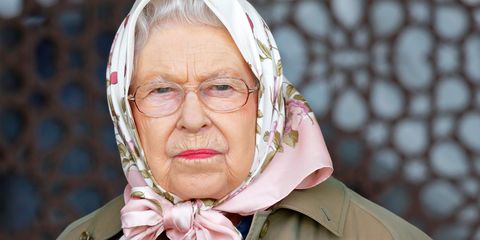 At 92 years old, Her Majesty is still performing her royal duties, like giving her formal consent to Prince Harry and Meghan Markle to get married, and making surprise appearances at London Fashion Week.

But sadly, there will come a day when Queen Elizabeth's reign ends and an heir will take the throne. When it does, Buckingham Palace is prepared with a specific protocol that will hopefully allow for a smooth transition between monarchs. In 2017, The Guardian revealed every carefully thought-out detail that's in place for when the Queen passes. It's code-named: "London Bridge Is Down."

What is operation "London Bridge Is Down"?

The meticulously laid-out plan dates all the way back to the early 60's, but has been revised and updated yearly to make accommodations for new people who would be involved. The Queen's death will first be confirmed by her personal physician, gastroenterologist Professor Huw Thomas, who's been working with Her Majesty for four years now. He will constantly monitor her health until she has passed.

Next to know will be the Queen's private secretary, who will relay the information via a secure phone line to the prime minister with the code words, "London bridge is down." Sir Christopher Geidt, the Queen's long-time private secretary, resigned from his position in July 2017 and was replaced by his deputy, Edward Young. So it's likely Young will now be the first official to receive the news—a prime example of how the plan is constantly needing to be updated.

From there, it's reported that, "the Foreign Office’s Global Response Centre will alert the 15 governments outside the U.K. where the Queen is also the head of state, and the 36 other nations of the Commonwealth for whom she has served as a symbolic figurehead." And all of this will quickly happen before the news is delivered to the media.

How will the media find out?

In the event of the Queen's death, the BBC will not be the first media outlet notified—surprising since they will be when Prince Philip passes away. "For many years the BBC was told about royal deaths first, but its monopoly on broadcasting to the empire has gone now," The Guardian article reports.

Instead, the Press Association news agency and all other global news wire services will be alerted at once. Directly following the formal announcement of the Queen's death, a footman dressed in mourning attire will post a black-edged notice on the gates of Buckingham Palace detailing a 10-day mourning period that will commence. The palace's website will change the background color to black and post a similar message.

How will the BBC and other British media outlets handle the news?

Like Buckingham Palace, every British media news outlet is prepared for the tragic day. As morbid as it may be, reporters and anchors at the BBC have said to have been rehearsing scenarios of the Queen's death for over 30 years. "The Times is said to have 11 days of coverage ready to go," according to The Guardian.

Britain's commercial radio stations are all equipped with blue "obit lights" that will flash in the case of a national catastrophe (the lights are tested once a week). When the news breaks, the lights will flash, alerting DJs to switch the music to their prepared somber music playlists. “If you ever hear Haunted Dancehall (Nursery Remix) by Sabres of Paradise on daytime Radio 1, turn the TV on,” BBC radio producer Chris Price wrote in 2011 for the Huffington Post. “Something terrible has just happened.”

But even the best laid plans can have their faults. When the Queen Mother died in 2002, someone failed to alert seasoned anchor Peter Sissons' news station until 20 minutes prior to his broadcast. Despite having pre-prepared a different outfit in case of the death of a royal family member, the anchor was told his burgundy tie would be fine. Sissons was later criticized for wearing a colored tie instead of all-black. There won't be room for mistakes when the Queen passes, which is why trainings have been very important.

The funerals of all senior members of the royal family—the Queen, Prince Philip, Prince Charles, or anyone else in the line of succession—are planned years in advance. As the reigning monarch, Her Majesty will be given a state funeral (not a public one). According to The Economist, "The only visual difference between the two types [of funerals] is that the gun carriage used in the military procession preceding a state funeral is pulled by Royal Navy sailors." On this day, banks and the London Stock Exchange will be closed.

Starting four days after her death, the Queen's body will be lying in state in Westminster Hall for four days so that the public can pay their respects. On the ninth day, there will be a procession from Buckingham Palace to Westminster Abbey for the service. The strategically planned route of the "London Bridge" parade is thought to be able accommodate at least one million people. The Archbishop Canterbury will lead the funeral service, which will "be attended by the royal family, politicians, and heads of state from across the globe."

There is speculation as to where the Queen will be buried—she could be interred in St. George's Chapel at Windsor Castle where many other monarchs lie, including her mother and father, King George VI. But she could also choose to be buried alongside her husband, Prince Philip, who will reportedly be buried in Frogmore Gardens.

"In theory, everything is settled. But in the hours after the Queen has gone, there will be details that only Charles can decide," The Guardian reports.

Who is next in line for the throne?

The Queen's eldest son, Charles, Prince of Wales, is the first in line to ascend the throne after his mother's passing. According to The Guardian, Charles is scheduled to make his first address as head of state on the evening of his mother’s death. Then at 11 a.m. on the following day, the flags will be raised and he will be proclaimed King of England.

There's been debate over what his wife Camilla's title will become. Before they were married in 2005, it was announced that she would be called Princess Consort rather than Queen Consort when Charles became King. She is technically entitled to the title of Queen by marriage.

Should Prince Philip survive his wife, his title would not change. After Elizabeth's father died and she took the throne, her mother (also named Elizabeth), was given the title "Queen Mother" to avoid any confusion. However, Philip's name would not interfere with King Charles, so he will remain Prince Philip. After Charles, the line of succession will go as follows: Prince William, Prince George, Princess Charlotte, new Royal Baby, and finally, Prince Harry.

Related Story
The Queen and Prince Philip's Marriage Timeline
This content is created and maintained by a third party, and imported onto this page to help users provide their email addresses. You may be able to find more information about this and similar content at piano.io
Advertisement - Continue Reading Below
More From Culture
Who's the Rumored New 'Bachelorette,' Katie T.?
The Best Documentaries of 2021 (So Far)
Advertisement - Continue Reading Below
Could 'WandaVision' Get a Second Season?
The Reality Shows You Should Be Watching in 2021
Taylour Paige's Star Is Rising
Taylor Swift Fans Outraged over Lame, Sexist Joke
The Best Bollywood Movies Ever
Films That Earned a NC-17 Rating (Thanks to Sex)
'Murder Among the Mormons': Who Is Mark Hofmann?
Tia Mowry Has a Gorgeous Bookshelf in Her Bedroom