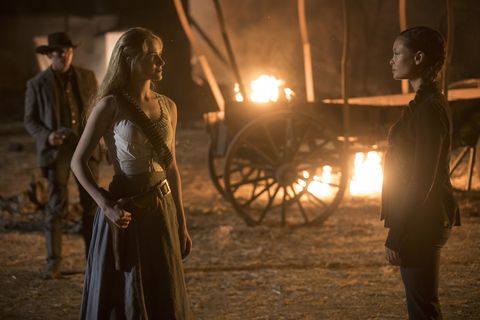 The second episode of Westworld Season 2 is called "Reunion" and now we have a very good idea about what that might be referring to. HBO just released four new pictures from the upcoming episode that are laced with hints about what's to come.

In the first photo, robot revolution leader Dolores and just-honestly-over-it-all-and-trying-to-find-my-daughter Maeve meet face-to-face in front of a burning wagon. Together, their stories make up the heart and soul of Westworld and their journeys to consciousness have been pivotal in changing the world of the hosts (and the humans, for that matter).

As similar as their stories have been in some ways, however, Dolores and Maeve's goals don't exactly align. Dolores (or maybe Wyatt) wants to burn Delos down and lead a revolution against the human race. Maeve, on the other hand, is intent on finding her daughter and finding freedom with her. While she has said that she suspects she shares the sentiments of whoever started the bloody uprising, she's not necessarily going to want in on Dolores' plan for world domination.

Could this lead to a clash? Will Maeve think, "Yeah, we should all rise up and take over" and join Dolores? It's impossible to say for sure, but their stances in this picture make it pretty clear that at least part of the reunion will be tense.

The next picture focuses on Dolores looking very modern. She's dressed in a black dress and has her hair pulled back into a low bun.

We've met someone dressed a lot like this before. Dolores' new look is very reminiscent of the hosts who welcome guests to the park. The one we met when William arrived at Westworld wore a similar ensemble in white:

Could Dolores be going undercover as a welcome host to sneak out of Westworld or even gain access to another park (we know Shogun World plays a role in this season)? Whatever she's up to, it seems like we'll be seeing another side of her soon.

The third image is of Ed Harris as The Man in Black/William, who is back in his wild west look and presumably ready to accept Ford's challenge and start his search for The Door.

Finally, we get a picture of Teddy. Dear, sweet Teddy appears to back in Sweetwater this week, but in what timeline is anyone's guess.

Anything is better than dead, which is where we left him at the end of the Season 2 premiere.

This content is created and maintained by a third party, and imported onto this page to help users provide their email addresses. You may be able to find more information about this and similar content at piano.io
Advertisement - Continue Reading Below
More From Culture
The Cast of 'The Nevers' Plays Trivia
The Most Exciting New TV Shows of 2021
Advertisement - Continue Reading Below
Get to Know Delessa From 'The Circle'
36 Movies With Super-Romantic Sex Scenes
Anne Hathaway & Elizabeth Nyamayaro on Compassion
When You Can Expect New Episodes of 'The Circle'
'Ginny & Georgia' Season 2: Everything We Know
Get to Know Courtney From Season 2 of 'The Circle'
'The Circle' USA Is Actually Filmed In the U.K.
The 25 Hottest Movies on Hulu Right Now