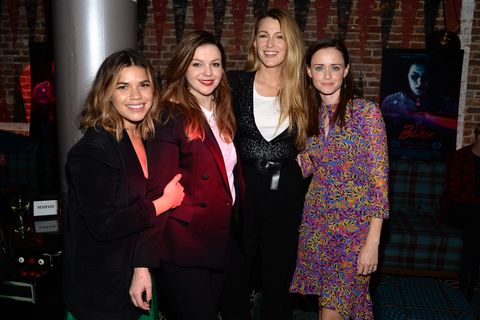 No movie cast in recent memory has been closer than the women of the Sisterhood of the Traveling Pants movies. Years after the films came out, they still turn out to support one another at premieres and show up on one another's Instagrams just hanging out like the real-life best friends they are.

And that enduring friendship might—just might—have earned us all a third Sisterhood of the Traveling Pants movie. Earlier this week, Alexis Bledel ignited the hope during an interview on The Tonight Show Starring Jimmy Fallon.

“We just pitched a third movie and I hope it comes together,” she said.

Now, Amber Tamblyn, who played Tibby in the movies, has fanned the flames in a series of tweets.

"I realize what I'm about to say regarding the third installment of the Sisterhood franchise is not enough to break the internet, but certainly could crack it..." she wrote, before disappearing for an excruciating 18 minutes.

"Sorry for that delay, my daughter needed me," Amber continued when she returned. "Where was I? Oh yes. Alexis is right. We've been pitching and there is a script. A good one. It's up to a studio now to make the film. So far, no luck. So keep your fingers crossed, or, knock down their doors with jeans emojis."

I realize what I’m about to say regarding the third installment of the Sisterhood franchise is not enough to break the internet, but certainly could crack it...

Sorry for that delay, my daughter needed me. Where was I? Oh yes. Alexis is right. We’ve been pitching and there is a script. A good one. It’s up to a studio now to make the film. So far, no luck. So keep your fingers crossed, or, knock down their doors with jeans emojis.

Blake Lively, who played Bridget in the films, has also discussed her desire to make a third movie in the franchise.

"I think that people who love the movie want to see it. Fans have gotten bigger movies made. Deadpool is all thanks to the fans. So I'm saying we'll do it," she told Entertainment Tonight.

Now we're just waiting for America Ferrera (and the studios) to weigh in. Prepare your blue jean emojis. Let's make this happen.

Kayleigh Roberts Contributor Kayleigh Roberts is the weekend editor at Marie Claire, covering celebrity and entertainment news, from actual royals like Kate Middleton and Meghan Markle to Hollywood royalty, like Katie Holmes and Chrissy Teigen.
This content is created and maintained by a third party, and imported onto this page to help users provide their email addresses. You may be able to find more information about this and similar content at piano.io
Advertisement - Continue Reading Below
More From Culture
The Cast of Grand Army Are BFFs IRL
A Look Back at Princess Anne's Life in Photos
Advertisement - Continue Reading Below
Who's in 'The Queen's Gambit'?
'After We Collided' Stars Play Trivia With Us
'The Crown' Season 4 Is Coming So Soon
It's Been a Weird Year for 'The Bachelorette'
Who Plays Townes in 'The Queen's Gambit'?
The Best Korean Dramas to Get You Hooked
To Save Victims, We Must Dismantle Purity Culture
Will There Be a Season 2 of 'The Queen's Gambit'?