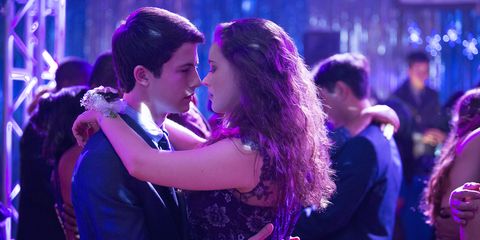 Netflix has announced the release date for 13 Reasons Why Season 2, and it's coming soon. Like, less than a month away kind of soon.

The controversial teen drama's second season will drop on May 18, news that Netflix announced with a mini-trailer of sorts.

In the announcement video, many of the characters from Season 1 are seen going about their lives while engulfed in a tornado of Polaroid pictures. At certain moments, the images in the Polaroids line up with the characters' to reveal, presumably, what's really going on with them on the inside.

Jessica sits on her bed, texting and looking happy, but her Polaroid reveals a sadder version of her. Bryce laughs and parties, looking every bit the all-American jock, but his Polaroid shows a flash of the rage that lives inside of him. And Clay prepares for what appears to be a court appearance (though if it's related to Bryce's crimes, Hannah's suicide, or something else entirely isn't clear) while a Polaroid of Hannah's face creates a perfect split with his own—probably because Hannah's death is still haunting him.

At the end of the sequence, the Hannah photo drops (and the rest of the tornado of Polaroids disappears) and Clay picks it up. Written on the back is an ominous message: "The tapes were just the beginning."

The video's description on YouTube promises that, "the truth is developing."

Watch the full announcement video yourself below:

13 Reasons Why is produced by Selena Gomez and garnered mix reactions after its first season for its depiction of suicide and sexual violence.