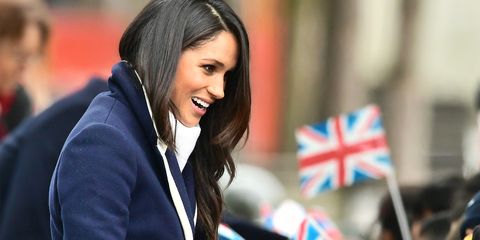 Meghan Markle will marry Prince Harry this Saturday in Windsor, but that doesn't automatically make her a British citizen—and she might not be for another five years. But she definitely plans to become one. And when it comes to her citizenship, she won't receive any royal treatment. According to Kensington Palace, since Meghan is from across the pond, she'll need to be "compliant with immigration requirements at all times."

The process of becoming a U.K. citizen is quite extensive. Aside from the basic rules, including being 18 years old and having no recent criminal record, a person must live in the U.K. for at least five years and prove they haven't spent more than 450 days outside the country.

However, it is possible that once she marries Harry, a born-and-bred British soul, she'll be able to become a citizen sooner. Regardless, Meghan will still have to take the citizenship test, which could be any variation of the thousands of possible questions about British values, history, traditions, and everyday life.

Would you be able to pass? Test your knowledge, below (and please enjoy 24 adorable pictures of Meghan and Harry along the way).

Erected in the Neolithic period between 3,000 and 2,000 B.C., Stonehenge is one of the world's most famous prehistoric monuments, and it sits in Wiltshire, England.

British commander, Horatio Nelson, 1st Viscount Nelson, led his people to victory against Napoleon Bonaparte during the Battle of Trafalgar in 1805, but was fatally wounded in during the fight.

According to the rules of Parliament, the Speaker in the House of Commons is "responsible for ensuring that the rules of the House on the way business is carried out are adhered to."

The Union Jack or Union Flag was created by Royal proclamation after the union of Great Britain and Ireland in 1801. According to Royal.uk, it "combines the crosses of the three countries united under one Sovereign: the kingdoms of England and Wales, of Scotland, and of Ireland."

One of the three crosses that makes up the Union Jack is from St. Andrew, the Patron Saint of Scotland. Andrew was one of Jesus's 12 apostles. Prince William and Kate Middleton met at the University of St. Andrews in Fife, Scotland.

Queen Elizabeth took the throne in 1952 after her father, King George VI died. A little basic math reveals that she would have been the reigning monarch for 60 years during her 2012 jubilee.

In 2012, the 14th Summer Paralympic Games, were held in London. It was one of the largest multi-sporting events held in the UK.

A poppy is pinned to each person's outfit on Remembrance day to commemorate the fallen soldiers from World War I. Poppies bloomed across some of the worst battlefields of Flanders in World War I and their red color became a symbol for the blood spilled in the war. The U.K.'s Remembrance Day is November 11, and is sometimes known as Poppy Day.

The House of Commons' second-largest party is known as The Opposition. The Conservative party, led by Prime Minister Theresa May is the largest party right now.

Since 1735, the Prime Minister of the U.K. has lived at 10 Downing Street. The Queen lives in Buckingham Palace.

Thanks to the British Anti-Discrimination Laws, everyone must be treated equally. The U.K. also passed the Equality Act 2010, which "requires equal treatment in access to employment as well as private and public services, regardless of the protected characteristics of age, disability, gender reassignment, marriage and civil partnership, race, religion or belief, sex, and sexual orientation." Okay, looks like we should all be moving to the U.K.

Queen Mary I of England was a devout Catholic and her strict religious laws resulted in more than 300 Protestants being burned at the stake, hence why she was given the very gruesome nickname, Bloody Mary.

According to Offbeat, it's important for future British citizens to know a little poetry history, including George Gordon, Lord Byron's poem "She Walks in Beauty," written in 1813. The lyrical poem was one of his most famous.

Adam Smith has been known as "the father of economics" and David Hume was considered one of the greatest philosophers to have ever written in English—both were said to have greatly influenced, and possibly redefined, the idea of the Enlightenment.

Answer: The Tower of London

The crown jewels are one of the most important symbols of the monarchy, and they are displayed in the Tower of London, which are open to the public.

Haggis is actually a traditional dish in Scotland, not Wales. It's made of sheep stomach, stuffed with oats.

Scottish isn't actually a language, although Scots is—depending on who you ask (some classify it as a dialect). Gaelic, a Celtic language, is still spoken by 1 percent of the Scottish population, according to the latest census.

In a 1940 speech to the House of Commons, Minister Winston Churchill said the famous line. The "few" refers to those pilots who fought in the Battle of Britain, which was a key battle during World War II.

Answer: It ensured no person could be wrongfully detained

During the reign of King Charles II, Parliament passed the Habeas Corpus Act of 1679, which said that no person could be unlawfully detained. A similar act appears in the U.S. Constitution under Section One, Article Nine, Clause Two, which states that, "The privilege of the writ of habeas corpus shall not be suspended, unless when in cases of rebellion or invasion the public safety may require it."

This seems like an obvious one for Americans since you have to be registered to vote in the United States, too. At least you know you'd get one correct answer on the citizenship test.

Her Majesty, the Queen is in fact the Supreme Governor of the Church of England. King Henry VIII was the first monarch to make himself the head of the Church in 1536.

The Whig Party was organized against U.S. president Andrew Jackson in 1834; it eventually evolved into the liberal party. According to an article from Brittanica, "They borrowed the name Whig from the British party opposed to royal prerogatives."

The Parliament of England was created in 1215 as a way to levy taxes so the U.K. could afford to go to war—but only with the consent of the King's royal advisors. It was originally called the Great Council, but slowly evolved into what is known as Parliament today.

Related Story
Meghan's Dad Won't Be Walking Her Down the Aisle
Alex Warner
Advertisement - Continue Reading Below
More From The Ultimate Guide to the Royal Family
Prince William Just Got a New Royal Title
Harry Felt Constrained by Royal Duties Growing Up
Advertisement - Continue Reading Below
Er, Meghan and Kate Haven't Spoken Since Megxit
Why Harry and Meghan Should Keep Their Protections
Why the Queen Canceled One of Her Annual Events
Meghan & Harry's Trademark's Been Blocked for Now
People Think Prince Charles Ignored Mike Pence
Meghan Markle's $65 Sunglasses Have Been Restocked
Meghan Markle Would Love to Be the Breadwinner
I Need Kate Middleton's Leopard Print Skirt