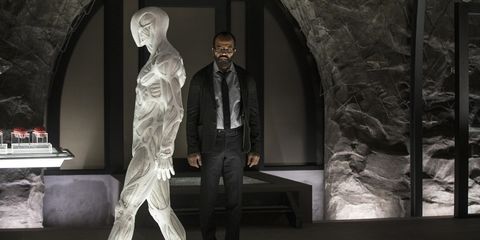 This post contains spoilers for Westworld Season 2, Episode 4, "The Riddle of the Sphinx."

Westworld Season 2 got off to a slow and confusing start with a lot of timelines establishing a lot of..stuff. Episode 4 kicked things up a notch and answered a lot of questions (and, of course, raised more). Let's dive in.

"The Riddle of the Sphinx" brought three big reveals, which we'll outline in order of longterm importance:

When we last saw Elsie, she was being strangled, presumably to death, by Bernard, who was acting under orders from Ford. We presumed wrong, however, because this is Westworld and no one you think is dead is actually dead.

Fans have been theorizing since her disappearance that Elsie would return, but some thought she might come back as a host, a la Bernard. As far as we know, however, Elsie is still human and still kicking. Ford apparently instructed Bernard to take her out to a remote part of the park (Sector 22—although all the elevators around it say 12 so that's maybe significant), chain her to a rock and leave her with a bunch of protein bars and a bucket.

Clementine drags a failing Bernard to Elsie's prison cave and leaves him there. He frees Elsie and, after explaining he's a host and convincing her that he's not planning to kill her or strangle her and move her to another horrific location, he leads her into another of Delos' super top secret hidden labs.

In the lab, Elsie repairs Bernard (at least for the time being) and uncovers more about Delos' endgame—more on that later.

Delos is working on transplanting human consciousness onto hosts.

Westworld has spent Season 2 (and, to a lesser extent, Season 1) hinting at Delos' longterm plan—which is not about entertaining people at robot-filled parks.

In Episode 4, through a series of Young William flashbacks, we learn exactly what potential he and James Delos saw in the park that made them want to invest. The short version: They're after immortality.

The slightly longer version: They theorize that, by uploading a person's consciousness onto a host, you can achieve a kind of immortality. When James Delos died, he became the first guinea pig, but 140 attempts and several years later, the Delos Bots keep breaking down after a month or so of functionality. In the last visit, we see the older version of William, played by Ed Harris, explain to the latest Delos Bot that he's changed his mind about the project and doesn't plan to keep trying. Instead of terminating the bot, he instructs the assistant to leave him to continue deteriorating. Way harsh.

Delos Bot isn't just a normal host. He seems to be something that's in between a host and a human—Elsie isn't entirely sure what she is when she and Bernard encounter him in the aforementioned secret lab. She terminates him by setting fire to him and his entire habitat, putting him out of his misery.

William's daughter is grown up, in the park, and has an agenda.

This brings us to the third and most significant development—William's daughter, Grace/Emily (we know her as Grace as an adult—the woman we met in RajWorld last week who survived a tiger attack and swam across the fake ocean to Westworld's shore).

The fact that Grace was in fact Emily, William's daughter, was hinted at heavily throughout the episode, beginning with the reveal that she's spent enough time in the parks to speak the language of the Native American hosts (we only know one other person who could afford to spend that much time in the luxury experience that is a Delos park).

When she momentarily meets up with Stubbs (Luke Hemsworth), he assures her that if they just wait it out, an extraction team will arrive to get them out of the park. She confidently replies that she's not interested in leaving the park (and we only know one other person who seems obsessed with practically living in the parks).

By the end of the episode, she meets up with William and greets him with a, "Hi Dad," confirming she's who most viewers had no doubt already guessed she was. Why is this more significant than the whole Delos might be cloning people or creating cyborgs thing? Because Grace/Emily is going to be key to uncovering why William changed his mind about the project—and what he plans to do when he finds The Door.

We know that William's wife committed suicide and that experience changed him. We know that he went from seeing Westworld as a means to immortality to becoming obsessed with the importance of mortality itself. We know these things must be linked—we just don't know how. Grace/Emily is a key to William's past outside of the park, something we don't know a ton about yet. We also don't know why she's intent on staying in the park and if she plans to team up with her dad or try to stop him from reaching The Door.

And, while we know Charlotte is still dead set on getting the park's oh-so-valuable cloning/cyborg/whatever IP out of Westworld, we don't know what William plans to do if he reaches Ford's Door and unlocks whatever power he now sees in the park.

What we do know is that Westworld wouldn't just show its hand this early in the season, so the biggest reveal has to be still to come.

Kayleigh Roberts Contributor Kayleigh Roberts is the weekend editor at Marie Claire, covering celebrity and entertainment news, from actual royals like Kate Middleton and Meghan Markle to Hollywood royalty, like Katie Holmes and Chrissy Teigen.
This content is created and maintained by a third party, and imported onto this page to help users provide their email addresses. You may be able to find more information about this and similar content at piano.io
Advertisement - Continue Reading Below
More From Culture
New Drama Movies That Promise to Move You
The Sexiest New Movies of the Year
Advertisement - Continue Reading Below
A Look Back at Princess Anne's Life in Photos
Where Is the Cast of 'Gilmore Girls' Now?
'The Bachelor' Is Back!
Who Is "Queen" Victoria on 'The Bachelor'?
Matt James' 'Bachelor' Cast: Everything We Know
Get to Know Serena Pitt From 'The Bachelor'
The Best Lesbian Movies Streaming on Netflix
Listen to the Best New Love Songs of 2021 (So Far)