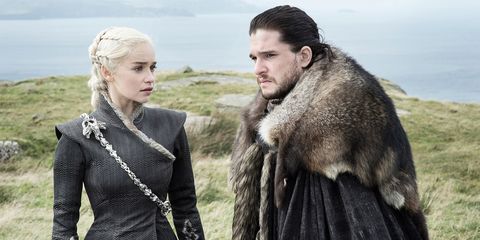 HBO is definitely not ready to leave Westeros (and Essos) behind when Game of Thrones ends its epic, eight-season run next year. The network famously opened the floor for ideas for a GoT prequel series (or "successor show" as HBO likes to call them) and was reportedly considering several different ideas last year.

Now, we are one step closer to more Thrones-themed television to fan out about. HBO has officially ordered a pilot for a Game of Thrones prequel, created by A Song of Ice and Fire author George RR Martin and British screenwriter Jane Goldman (who wrote Kick Ass and X-Men: First Class).

According to a brief statement from HBO, the new show would be set thousands of years before the events of Game of Thrones and would follow "the world's descent from the golden Age of Heroes into its darkest hour. From the horrifying secrets of Westeros' history to the true origin of the White Walkers, the mysteries of the East, to the Starks of legend… it's not the story we think we know."

If picked up, the potential prequel would not feature any of the current characters or actors. HBO's programming president, Casey Bloys, has been emphatic that the Game of Thrones story will be complete with Season 8. "This story, A Song of Fire and Ice, is done," he said. "There's no revival, reboot, spinoff talk."

Bloys has also been clear that the new series won't premiere before Thrones' finale in 2019.

"The number one priority in all of this is the final season of Game of Thrones. I don't want to do anything with a spin-off, or anything that detracts, or distracts from that," he explained at the Television Critics Association's summer press tour in 2017. "That season will happen, and my guess is it would be at least a year before you saw anything else. What I don't want is the attention to be drawn from the final season—which I think is going to be epic and amazing—and somehow have the distraction of a new Game of Thrones airing right after that. It's best to separate it, and that's what we'll do."