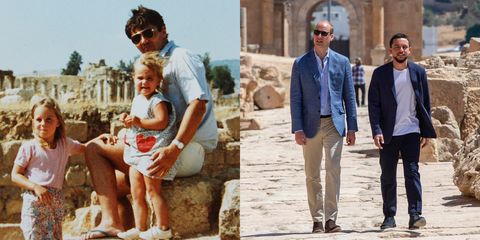 After a short few weeks of paternity leave following the birth of Prince Louis, Prince William has jumped back into his royal duties. The Duke of Cambridge is currently en route to a historic visit to Israel and Palestine, but first he made a quick pit stop in Jordan to tour the land and "build a real and enduring relationship with the people of the region," according to Kensington Palace.

The Crown Prince of Jordan Al-Hussein Bin Abdullah II was his personal tour guide and took him everywhere from a technical university to a British embassy reception (they even hung out together and watched soccer), but one spot held a special meaning for William: the Jerash archaeological site, a first century Roman city.

His wife, the Duchess of Cambridge, visited the exact same spot when she was four years old living with her parents in Jordan, and there's photo evidence to prove it.

Like the sweet husband and dad he is, Will stood in the exact same spot as his wife and posed for a photo. Also, please take a moment to appreciate Kate Middleton's blonde hair!

As he continues his royal tour, Prince William will keep exploring the city with the Crown Prince of Jordan, who seems like he's already snagged an invite to the Palace.

“The welcome that The Crown Prince showed me today is one that I will always remember, and which I hope to be able to reciprocate one day in the U.K.," says William.

The friendship I didn't know I needed.

“The welcome that The Crown Prince showed me today is one that I will always remember, and which I hope to be able to reciprocate one day in the UK.” – The Duke of Cambridge, in Jordan. pic.twitter.com/xlyIyestQx

Related Stories
Meghan Markle Taking Over One of The Queen's Tasks
Princess Charlotte Is Obsessed with Fashion
Rachel Epstein Associate Digital Editor Rachel Epstein is the associate editor at MarieClaire.com, where she covers celeb and royals news, culture, lifestyle, and politics.
Advertisement - Continue Reading Below
More From The Ultimate Guide to the Royal Family
Prince William Just Got a New Royal Title
Harry Felt Constrained by Royal Duties Growing Up
Advertisement - Continue Reading Below
Er, Meghan and Kate Haven't Spoken Since Megxit
Why Harry and Meghan Should Keep Their Protections
Why the Queen Canceled One of Her Annual Events
Meghan & Harry's Trademark's Been Blocked for Now
People Think Prince Charles Ignored Mike Pence
Meghan Markle's $65 Sunglasses Have Been Restocked
Meghan Markle Would Love to Be the Breadwinner
I Need Kate Middleton's Leopard Print Skirt