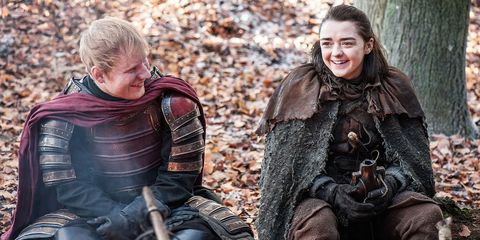 Remember when Ed Sheeran made a cameo on Game of Thrones? It's possible you blocked it out, if you were as traumatized by the memory as some of Sheeran's costars. Here's the clip, just in case you need a reminder:

Ed played a member of the Lannister army who sings and drinks with Arya for much longer than any of us expected when we heard the singer would have a cameo on the show. Many fans were left thinking, "Uh...what?" And, turns out, they weren't alone. One Game of Thrones star has opened up about his thoughts on the cameo and he had a lot more to say than his character would have, that's for sure.

"I'm not a fan of the cameos in Game of Thrones. I don't like them," actor Kristian Nairn, who plays Hodor, told The Huffington Post. "I think it's stupid. I don't mind going on the record on that. I just think it takes you right out of the world."

And yes, that includes Ed.

"Especially Ed Sheeran. I was like, 'Why is Ed Sheeran here?' I mean, Ed Sheeran's great. He’s a great guy, great musician, but why is he in Game of Thrones?" Nairn added.

"I’m not saying I’m not a fan of Ed Sheeran," he clarified, trying to stay kind to Ed without holding back his thoughts on the cameo. "I’m being tactful here, but just not a fan of the cameo. I think most people would agree with me there. It was a big snap to reality. It’s like, 'What? What?' It’s a fantasy show. We’re all caught in this amazing world and spend so much time and money and talent to create, and all of a sudden there’s a pop star? What?"