The witch is back. Seven years after fans last saw Constance Langdon hanging around the Murder House, Jessica Lange has finally returned to American Horror Story looking perfectly coifed and, inevitably, perfectly evil. For the first time in four seasons, fan favorite Lange is poised to return to the AHS world, and yesterday show creator Ryan Murphy gave viewers their first glimpse at her highly anticipated appearance in the current season eight, Apocalypse.

Sharing the exciting behind-the-scenes photo, Murphy wrote: “To celebrate 300k followers, here’s a first look at the return of Queen Constance...the one and only Lady Lange...being directed by that dynamo of wit and talent Sarah Paulson. Love them both!”

Jessica, who has earned two Emmys and a Golden Globe for her work on American Horror Story so far, is reviving her first, Emmy-winning character, Constance. It’s the first time that Lange has been a part of the anthology cast since way back in 2011's season four, Freak Show, and it hasn't quite been the same without her.

As if her return wasn’t already special enough, it also ties in with the special episode directed by co-star Sarah Paulson, scheduled to be the sixth in the season. Paulson, also pictured in Murphy's snap alongside Lange, is reprising her Coven and Murder House roles this time, as well as introducing a new character—a mysterious, post-apocalyptic warden known as Ms Venable.

Apocalypse (which aired its killer first episode last week) is set to bring the worlds of Murder House and season three’s Coven together into the same universe. AHEM, here's your spoiler alert, but the premiere saw the introduction of Constance's antichrist son, Michael Langdon looking all grown up, but there's been no sign of the Coven witches just yet. So, it remains to be seen how the characters from each series will co-exist in inevitably horrifying harmony. 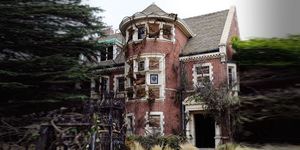 Someone Bought The AHS Murder House
This content is created and maintained by a third party, and imported onto this page to help users provide their email addresses. You may be able to find more information about this and similar content at piano.io
Advertisement - Continue Reading Below
More From Culture
Who's the Rumored New 'Bachelorette,' Katie T.?
The Best Documentaries of 2021 (So Far)
Advertisement - Continue Reading Below
Could 'WandaVision' Get a Second Season?
The Reality Shows You Should Be Watching in 2021
Taylour Paige's Star Is Rising
Taylor Swift Fans Outraged over Lame, Sexist Joke
The Best Bollywood Movies Ever
Films That Earned a NC-17 Rating (Thanks to Sex)
'Murder Among the Mormons': Who Is Mark Hofmann?
Tia Mowry Has a Gorgeous Bookshelf in Her Bedroom