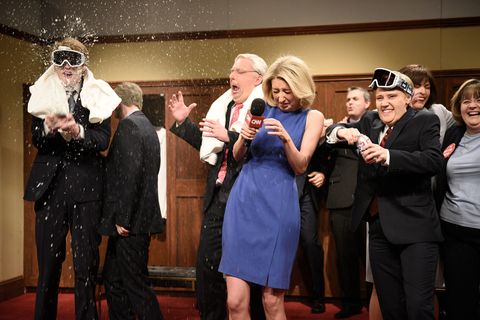 On Saturday, members of the Senate confirmed Brett Kavanaugh as an associate justice of the Supreme Court. On Saturday night, SNL took aim at the controversial decision.

Saturday Night Live never shies away from political commentary and the long-running comedy show did so in short order this weekend, dedicating its cold open to Kavanaugh's confirmation in a sketch that is both over-the-top and hauntingly, gut-wrenchingly real at the same time.

The premise of the sketch is simple: CNN sends chief political correspondent Dana Bash (played by Heidi Gardner) to the Republican "locker room" as they celebrate their team win in confirming Kavanaugh to the highest court in the country. In an ESPN-esque scene, various top Republicans stop by to celebrate their victory, gloat, and make tone deaf comments about #MeToo protestors.

"Republicans read the mood of the country, we could tell that people really wanted Kavanaugh," Beck Bennett said as Senate Majority Leader Mitch McConnell in a perfect impression of the senator. "Everyone's pumped — from white men over 60 to white men over 70.

It was Kate McKinnon's appearance as Sen. Lindsey Graham though that really cut deep, perfectly explaining why this decision has been so frustrating and heartbreaking for many Americans.

"We made a lot of women real worried today but I'm not getting pregnant, so I don't care," McKinnon's Graham said.

McKinnon's Graham also referenced the #MeToo movement and the protestors who stormed the Capitol this week, fighting against Kavanaugh's appointment.

"They've been there for us all week cheering, screaming outside our offices," McKinnon said as Graham.

"I'm sorry, you think those were fans?" Gardner-as-Bash asked her, looking appropriately confused and concerned.

"Oh yeah, for sure and I know that they agree with us 'cause they are shouting out 'me too'," McKinnon's Graham replied.

Watch the full sketch for yourself below:

This content is imported from YouTube. You may be able to find the same content in another format, or you may be able to find more information, at their web site.
This content is created and maintained by a third party, and imported onto this page to help users provide their email addresses. You may be able to find more information about this and similar content at piano.io
Advertisement - Continue Reading Below
More From Culture
Will There Be a Season 3 of 'Virgin River'?
'Bachelor In Paradise' 2021: Everything We Know
Advertisement - Continue Reading Below
What Is Gunther From 'Friends' Doing Now, Anyways?
All the Deets on Michelle's 'Bachelorette' Season
'Life After Happy Face' Is Your Fave New Podcast
The New Horror Movies That'll Leave You Breathless
Zendaya Shared a Teaser of 'Euphoria' Season 2
Listen to the Best New Love Songs of 2021 (So Far)
Meet the Cast of 'Too Hot to Handle' Season 2
Meet the Cast of Katie's 'Bachelorette' Season