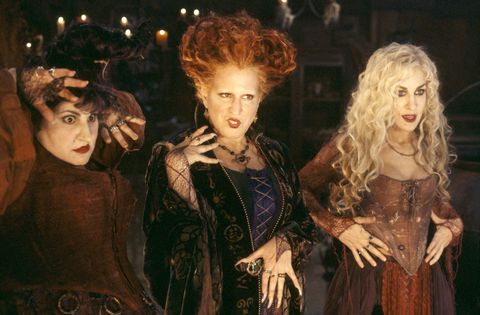 For better or worse, Hollywood is really into remakes right now. But instead of viewing this trend as annoying and cynical, what if we really leaned into it and used it as an opportunity to rebuild the classics from scratch, making them even more perfect? It is in that spirit that MarieClaire.com presents Recasted, which dares to wonder, “Who would we want to see in this iconic film today?” Think of it as Fantasy Football mixed with your annual Oscar Pool

Halloween is here and I don’t have a costume. Normally this would be a mood-killer, but I’ve got everything I need to commemorate the holiday: My favorite bottle of Sauvignon Blanc, a plethora of king-sized candy bars, and a Netflix queue full of all the fall classics. The one that sticks out the most for Peak Halloween Enjoyment? Hocus Pocus.

I have never met a person who claimed to dislike this cult—well, witch—classic. Though it wasn’t that warmly received when it first came out in 1993 (maybe because of the confusing choice to release it in the summer?), legions of Disney Channel–bred ‘90s kids raised it from the dead in the decades that followed. Yes, nowadays the Sanderson sisters have had the last laugh, thanks in no small measure to a slew of Halloween movie marathons.

Coincidentally starring two Recasted alumnae—Sarah Jessica Parker and Bette Midler—Hocus Pocus deserves a proper reboot that would show not only that it’s in on the joke of its own cheesiness, but that the original is in fact a comedy classic. Plus, after Billy Eichner and Tiffany Haddish made a remake of their own, I decided to take a whack at a full-on fantasy reboot.

I swear this series isn’t just a Julie Klausner fan column. And even if it is, there are worse things it could be. Ms. Klausner has already shown that she’s interested in the idea of taking over one of Bette’s iconic roles, so why not make it a double feature? Besides, she and the next two new cast members together would create pure magic. Pun intended, okay?

Watch a set by comedian Kate Berlant (try her half-hour Characters special on Netflix) and you might walk away convinced she’s an actual witch. She’s connected to a different realm somehow: Berlant can truly bring any type of person—no matter how ridiculous—to truly believable life. Mary’s power lies in her superhuman sense of smell, and there’s no doubt in my mind that Kate could easily steal the whole movie just...sniffing. She really could.

If you don’t know Catherine Cohen, then you’re welcome for changing your life. Her performances are a staple of the New York comedy scene, and I firmly believe that by this time next year, she’ll be everywhere. Cohen would be the perfect Sarah Sanderson, as she already entrances audiences with her singing comedy Cabernet Cabaret show. Luckily for them, her intention isn't to trick you and steel your beauty—only to get her songs stuck in your head for the rest of your life. And they will be.

Because you can’t have Kate Berlant without John Early (just watch this comedy duo in action). Early would not only thrive as a dubbed animatronic cat, but I’m already halfway done fever-dreaming a spin-off of Thackery and Mary running off somewhere and starting over. Think of it as a Seinfeld, but with a cat and a witch. Executives, are you hearing this? 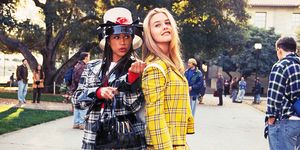 Recasting 'Clueless' for the Modern Era
Danny Murphy Culture & Social Editor Danny is the cultural and social editor for BestProducts.com where he's been covering crazy trends, celebrities, and anything else insane since 2016; He has also contributed to Marie Claire, Delish, and Medium. When he's not looking for the next viral sensation online, you can find him watching Bravo, drinking a third cold brew, or trying to convince people to go to karaoke.
This content is created and maintained by a third party, and imported onto this page to help users provide their email addresses. You may be able to find more information about this and similar content at piano.io
Advertisement - Continue Reading Below
More From Culture
A Guide to the Fairies of 'Fate: The Winx Saga'
'You' Season 3 Is Adding a Menacing Character
Advertisement - Continue Reading Below
'Fate: The Winx Saga' Season 2: Everything We Know
Who Is Michelle Young on 'The Bachelor'?
Who Is the Voice on the Radio in 'WandaVision'?
Everything We Know About Matt James
How to Join Marie Claire's Virtual Book Club
Watch UCLA Gymnast Nia Dennis' Epic Floor Routine
Fans React to 'Euphoria' Special 'Part Two: Jules'
'Detransition, Baby' Is Our Feb Book Club Pick