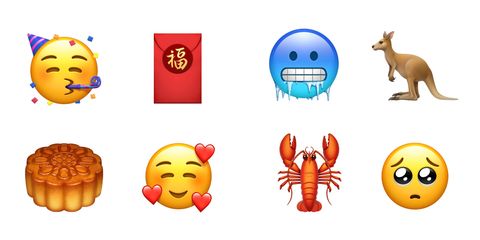 In July, Apple announced that their next iOS update would include the arrival of over 70 new emojis, including more diverse people emojis with additional hair options, as well as more animals and food emojis. Fast forward to today, and they're here! As Time reports, the new iOS 12.1 update became available on Tuesday, and the new picks are great.

Apple previously stated that they wanted more options to represent their global users, and the new emojis include a moon cake and red gift envelope. For reaction emojis, new options include a party hat emoji, and an emoji with hearts all over it, for when you really need to express your ~feels~.

Other reaction emojis include a cold face emoji and a pleading face. For animal lovers, there is a now a kangaroo emoji, as well as a llama, raccoon and swan.

Travel lovers will appreciate the new hiking boots, compass, and suitcase, while sports lovers will go for the skateboard, frisbee, and lacrosse emoji.

Food wise, a salt shaker and cupcake are now available. There's also a bagel, but that new pick caused a little bit of controversy when the new emoji news was first announced.

According to Time, many people thought that the original bagel emoji released in the beta stages looked unappetizing, leading Apple to change the bagel emoji to include more texture and cream cheese for the final version.

And as emoji blog Emojipedia reports, this isn't the first time Apple has changed an emoji in the beta stages. The octopus emoji was changed to look more "realistic" in iOS 11.1 beta in 2017, but it was changed back to its original cute design in the final version of iOS 11.1. 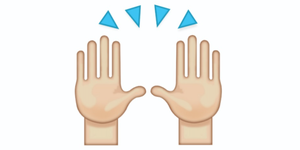 16 Emojis You've Been Using All Wrong
This content is created and maintained by a third party, and imported onto this page to help users provide their email addresses. You may be able to find more information about this and similar content at piano.io
Advertisement - Continue Reading Below
More From Culture
Anne Hathaway & Elizabeth Nyamayaro on Compassion
When You Can Expect New Episodes of 'The Circle'
Advertisement - Continue Reading Below
'Ginny & Georgia' Season 2: Everything We Know
Get to Know Courtney From Season 2 of 'The Circle'
'The Circle' USA Is Actually Filmed In the U.K.
The 25 Hottest Movies on Hulu Right Now
There's a UK Version of 'The Circle'
Bethenny Frankel Is Minding Her Own Business
A Look Back at Princess Anne's Life in Photos
Historical Films to Stream If You Loved 'Hamilton'