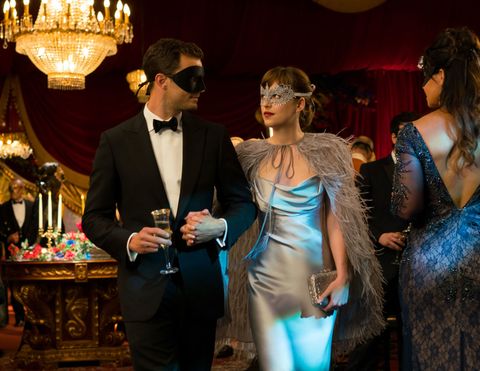 1. A spy snuck on set. "There were a lot of security people. You just got used to them so it didn't seem strange, and the fans were great. Although, I did hear a story about a woman who lied and said she was a PA. She snuck on set and started doing little manual things like putting Cokes in the cooler. Finally somebody started a conversation with her and something seemed weird and we discovered that she was a spy for a fan Twitter."

2. They left out the vanilla ice-cream sex scene due to time-constraints. (No, really!) "There's nothing we left out on purpose. It was all simply about time. The movie's two hours. When you go to edit, you can't see everything [as an audience might]. You look at it and it seems pretty good. Then you screen it for an audience and it kind of lags in places, so you say, 'Oh, why did I leave that in there? And you change it.'"

3. Dakota and Jamie have chemistry, he swears!! "The actors genuinely like each other. The rumors of them not having chemistry are totally bizarre to me. Now, what the first movie was, I leave to others to judge that, but I sure think they have it now. I think that comes from the time they spent on the [first] publicity tour, after doing the movie. They really kind of bonded. And they found out that they make each other laugh. And so there was a lot of giggling.

4. There was giggling during sex scenes. "The sex scenes by definition, are going to be less fun than other scenes. But in this case they were the best experience I ever had. When we did the sex stuff, it's always kind of a little bit tense and people get shy—but then one of the other of them would giggle and it was all okay and it wasn't tense anymore. Some of [that] spilled into the movie. I was watching again last night: When he spanks her, she giggles a little bit."

5. They shot the sex scenes in total privacy. "Sex scenes are always closed set, which just means you're down to the minimum number of people in the room. And since the camera's on a big crane, you remotely control it, so even the camera operator is not in the room. It's just myself, the [Assistant Director], and the camera. And then of course you stop and hair and makeup comes in and pretties everybody up. I purposely made a decision to be very exact in what I was gonna do beforehand, draw storyboards, and then go to the actors and say, 'Okay, this is exactly what I want to do.'"

6. The easiest scene to film was, surprisingly, when Christian flipped Ana over with the spreader bar. "I don't know why it was the easiest, but it was. The day before, we had our BDSM expert there showing us how to do this and do that, and I thought, Man, this is gonna be hard tomorrow. And I don't know what happened. I came to the set, Dakota's in this great mood, like bouncing on the bed saying, 'Let's do this!' And we did it very quickly, and [Dakota and Christian] were having a very good time. I mean, she was just giggling all over the place. So that one was easy."

7. Jamie Dornan was totally open to showing his penis in the movie. (But, alas, he doesn't.) "Showing penis was definitely an option; nobody ever said 'do it' or 'don't do it.' We set up shots not thinking about that and there were a couple of times when it came really close. But that wasn't on purpose. It was just where the camera was."

8. The elevator scene was the hardest scene for Dakota to shoot. "It was a fake elevator. It was just a wall back there and we were all out here, so it wasn't too bad in terms of being cramped. But it was in terms of Dakota getting into it. [She] said that it was the hardest scene for her to shoot. I was so surprised because it wasn't that explicit or anything, but she said she's surrounded by these extras, these strangers."

9. Kim Basinger (above), who plays Elena, was a huge get. "We considered a lot of people, met with a lot of people, and were not really thrilled. And so we threw it by Kim's people and she responded; she was curious just to talk about it. So myself and Mike De Luca, the producer, went and had a long lunch with her. And I just fell in love with her. And I was sitting next to her and she was talking to the producer across the table, so I would like sneak looks at her face. Because she was so beautiful. She brings out a nice Hollywood [makes a sizzle sound] to the movie."

10. E.L. James was on set all the time. "She had her own little producer's village and she was there every day. I really respected her for that. Like she was looking after her baby. I made a point, knowing that there was some friction on the first movie, of really getting to know her as best as I could before I signed on, and I got a connection with her, this lady from the UK who is very liberal, very funny, and very respectful. It suits me. There were days when I wouldn't even see her all day and there were other days she'd come up and literally whisper in my ear, 'You know, in the book in this scene, she said this instead of that.' Maybe Dakota would change the line slightly or something like that. And so then she'd say, 'That's all I'm saying.' And then she'd go away. Sometimes she'd say something and I'd say, 'Good idea!' And sometimes I'd say, 'No I don't think that's going to work in the movie.' And she'd say, 'Okay.' It was not one moment of a fight. And we're pals now."

11. He thinks E.L. James should do a miniseries. "I suggested to Erika that, in a couple years, she could do a mini-series, like on Netflix or Amazon, and expand on [the story] a lot since there's so much in the books. Because I think she still itches for that. She understands movie making, understands that certain things have to be taken out just because of the pace—but I think she'd like it if it could be a much more complete thing."