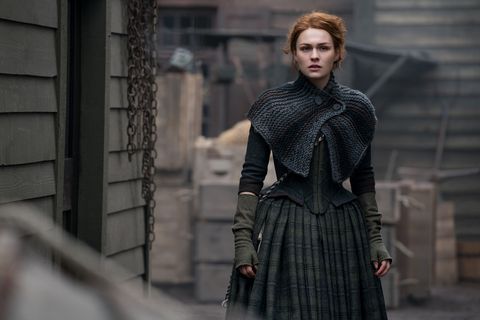 This is the episode everyone has been waiting for–the first time Jamie Fraser meets his daughter, Brianna. It’s definitely worth the wait. And you’ll need a whole box of tissues. Every actor gives a good performance, especially Sophie Skelton as Brianna. But Caitriona Balfe and Sam Heughan are outstanding and seem to make everyone around them better–both have faces that express emotions subtly and beautifully, which is good since so many emotions are found in this exciting episode. Shock, fear, frustration, surprise, tenderness and love. Most of all love.

The episode begins with a shattered Brianna returning to her room after being raped by the pirate Stephen Bonnet. That’s after losing her virginity to her true love, Roger MacKenzie–all in the same night. But she will not be deterred from her mission to find her parents, Jamie and Claire Fraser. Roger comes to find her and make up after their quarrel, but never sees her because Bonnet has forced him back to work aboard his ship. “A limb or a lass?” he asks Roger. Luckily, Brianna’s busybody maid, Lizzie has discovered that the Frasers are actually in Wilmington. A touching scene unfolds as Brianna finds Jamie relieving himself in a courtyard and approaches him. “What do you want here, lassie?” “You.” When he brushes her off, she tells him, “My name is Brianna.” Wariness turns to hope, then amazement and then great tenderness on Heughan’s expressive face. With tears in his eyes he tells her that he’s always thought of her as his wee bairn, Scottish for baby. They surprise Claire, and Balfe’s face shines with shock and joy as she hugs the daughter she thought she’d never see again. When they introduce Brianna to her cousin Ian (the charming John Hunter Bell) he accepts her right away, despite the fact that his aunt and uncle had never mentioned they had a daughter. “When it comes to you, Auntie Claire, I’ve learned it’s best not to ask too many questions.”

A lot of plot unfolds on the way to Fraser’s Ridge. Ian tells Brianna the story of Bonnet robbing them and how guilty Jamie is because of it. Lizzie has the hots for Ian. Brianna admits to Claire that she is in love with Roger, but she sent him away, back to Scotland, back to the future. Jamie is in a constant glow, thrilled to finally meet his daughter, but shy around her. Murtagh (Duncan Lacroix), Jamie’s godfather, is waiting for them at Fraser’s Ridge. He’s been with Jamie and Claire from the beginning of their romance and he’s the only one who truly understands what a miracle it is to have their daughter with them. Crusty guy that he is, he beams and asks, “What took you so long, lass?” In the warm glow of the cabin, Brianna gets to see the tenderness and love between her parents, so different from the relationship Claire had with her other husband, the man who raised Brianna, Frank Randall.

Jamie tiptoes around Brianna, stealing glances at her, overjoyed to have her there and unsure how to get close to her. When she demonstrates that she’s a great shot with a rifle, he’s astonished. “Where did you learn to shoot like that?” “My father.” Heughan’s face subtly reveals how it wounds Jamie that she thinks of Frank as her father, not him. Jamie turns to Claire in a lovely, typical parental exchange as he wonders how to bond with her. “Take her hunting,” she suggests. So, they bond as they hunt together for bees. “I dinna want to replace your father,” he tells her. “I’m grateful to him.” Because of the war in Scotland, “I had to give you to him. But you are my flesh and blood and since you’ve been here, my heart and soul as well.” They reach an understanding. “What shall I call you?” she asks. “You can call me Da.” “Is that Gaelic?” “No..it’s just simple.” There are so many tender scenes here–between Heughan and Skelton and between him and Balfe. Lots of tears.

Claire knows something’s wrong with Brianna. It’s not just being in this strange new world or missing Roger. Brianna is relieved when Claire finally figures it out. “How far along are you,” Doctor Claire asks. Balfe’s face is pure love as she hugs Brianna to her, like the little child that she once was. But there’s more. “It might not be Roger’s.” When Claire hears about the rape, she is horrified, clutching Brianna who blames herself for not fighting him off. When Claire says, “Oh my baby,” it was impossible to keep back tears. She’s the bridge between her husband and her daughter and has the painful task of telling Jamie what happened. But there’s even more. Claire finds her original wedding ring in Brianna’s clothes and realizes that Bonnet is the man who raped her. Brianna makes her promise not to tell Jamie, because he will blame himself.

Roger, finally finished with his stint on Bonnet’s ship, makes his way to Fraser’s Ridge to find Brianna. Lizzie, trying to be helpful, warns Ian and Jamie, that this is the man who she saw with Brianna. “She was afraid of him,” she tells Jamie. “You’re sure he’s the same man who attacked her?” Once she confirms it, Jamie beats Roger nearly to death and tells Ian to get rid of him. There are secrets crowding into the little cabin on Fraser’s Ridge that will eventually threaten the family’s happiness. This is an episode worth watching more than once for all the nuances you'll find here.

Related Stories
Inside the Making of 'Outlander's' Sex Scenes
5 Biggest Takeaways From 'Outlander' Episode 8
Sam Heughan and Caitriona Balfe Talk 'Outlander'
This content is created and maintained by a third party, and imported onto this page to help users provide their email addresses. You may be able to find more information about this and similar content at piano.io
Advertisement - Continue Reading Below
More From Culture
What Makes an Olympic Moment?
Team USA Fencers Protested Their Teammate
Advertisement - Continue Reading Below
Hang On, What's "ROC" at the Olympics?
Suni Lee Just Scooped Up Gold in Tokyo
Movies Everybody Should Watch At Least Once
'Virgin River' Season 4: Everything We Know
'Love Is Blind' Season 2 Is Coming!
Simone Biles' Sister Is Her Fiercest Champion
Simone Biles Quotes to Live By
Could 'Manifest' Come Back for a Fourth Season?