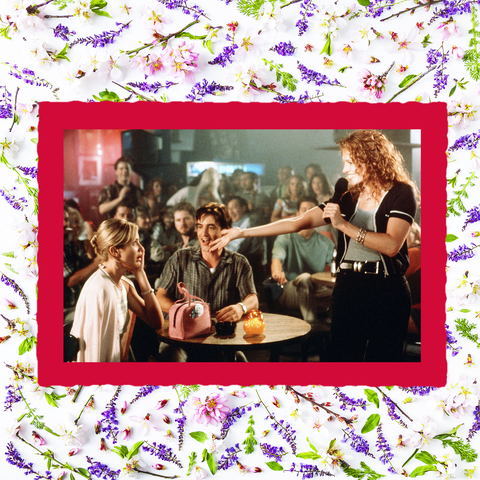 What the mid-2000s are to flat ironed bangs, the 1990s were for Romantic Comedies. Riding an almost decade-long stint as rom-com queen, My Best Friend’s Wedding helped further cement Julia Roberts' icon status. With this film, you get a story based on one of the most classic movie friendship trope: WE’RE GETTING MARRIED IF WE’RE BOTH ALONE AND CAN’T AFFORD TINDER PLUS BY AGE 30! which thankfully, is not a thing in real life. What you also get is a great feel-good film that is one of the romantic comedies that made it through without being ripped apart by reviews. Why do film critics hate cheesiness?!

One of my favorite things about My Best Friend’s Wedding is that it doesn’t require you to completely suspend reality. A wedding between two people doesn’t magically just stop because one of the almost-newlyweds is only listed as a Supporting Character. The protagonist here, portrayed by Julia Roberts, doesn’t run off with her man in the end. And her ‘One That Got Away’ isn’t marrying an awful person, but instead, he’s going off with a fleshed out character who you’re actually semi-rooting for (mainly because how can you not root for Cameron Diaz?). Directed by the genius writer behind another classic, Muriel’s Wedding, P.J. Hogan, I feel that these big names that I’m pulling for this recast will probably be down. And worst case, we’ll say a little prayer that they decide to join in the fun.

It’s kind of weird that Jennifer Lawrence hasn’t joined the world of romantic comedies yet. She loves fun, pizza, and being fun. She’s been out of the spotlight recently, which comes as a shock after the years of JLaw being on the screen, and I feel jumping into a classic romantic comedy like My Best Friend’s Wedding is the perfect way for her to come back into the world and say “yes, I still have an Oscar!” Besides, I feel that honoring Julia Roberts is an almost impossible task, and she’s proven herself to me that she’s up for the challenge. I mean, my approval is all Jennifer Lawrence ever wanted.

Can I just say—I truly forgot that Liam and Jennifer have already co-starred as love interests before in The Hunger Games (also what I call 11 AM when I’m at my desk and wondering: when is it too early to go to lunch?). It’s already a known fact that he and Jennifer have amazing chemistry strong enough to make every middle schooler scream, and I feel that when they reunite nothing will have changed. I mean, besides a wedding to Miley Cyrus, but hey, that's why it's called acting, right?!

My high school theater kid is showing, because I 100% found out about Becca Tobin from Glee. Did I used to record videos of myself lip-syncing their songs and posting them on people’s Facebook walls Yes, okay, but 2009 was a different time. Becca is the perfect Diaz-replacement because of her knack for playing characters that are quick-witted, sassy, but ultimately have a heart of gold—just like Kimmy.

Acting as Julieanne Porter’s conscious in the film, George Downes plays the vital role of making us not totally turn on our scheming leading lady. No, literally, they had to change the ending of the movie because people hated her too much. Not only did the original George keep audiences #TeamJules (a team I am always on), but he also is essential for some extra comedic relief — which is exactly why Dan Levy is perfect for the part. I feel that Schitt’s Creek SZN is upon us, with everyone binging it and screaming “WHERE HAS THIS BEEN ALL OUR LIVES?” and that is without a doubt due in part to the comedic timing, instant likability, and talent of Dan Levy. Plus, he’s also the creator and writer of his show, so maybe he’ll want to rewrite this film while he’s at it, too?

MORE ROM-COM COVERAGE, RIGHT THIS WAY
It's Rom-Com Week on Marie Claire!
Who Belongs in a Remake of 'Splash'?
Who Should Star in a ‘Charade’ Reboot?
This content is created and maintained by a third party, and imported onto this page to help users provide their email addresses. You may be able to find more information about this and similar content at piano.io
Advertisement - Continue Reading Below
More From Culture
'Shadow and Bone' Cast: Get to Know Who's Who
The Unbearable Whiteness of Ballet
Advertisement - Continue Reading Below
'Ginny & Georgia' Season 2: Everything We Know
The Ultimate Ranking of 'GOT' Sex Scenes
The Cast of 'The Nevers' Plays Trivia
The Most Exciting New TV Shows of 2021
Get to Know Delessa From 'The Circle'
36 Movies With Super-Romantic Sex Scenes
Anne Hathaway & Elizabeth Nyamayaro on Compassion
When You Can Expect New Episodes of 'The Circle'