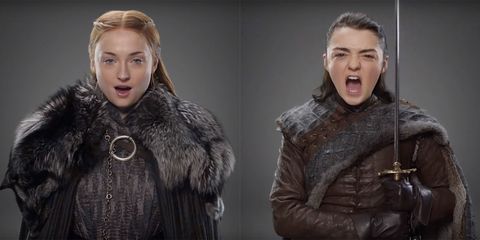 HBO just released a couple of promos featuring the characters from all its hit shows, but it included some extra Easter eggs for Game of Thrones fans. The commercials revealed, for the first time, what all the series' main characters are dressed like for the highly anticipated upcoming season.

Previous seasons saw characters like Daenerys Targaryen wearing sleeveless breezy dresses in Meereen, or even Cersei Lannister in few layers and patterned fabrics in sunny King's Landing. But this time, the wardrobes are all winter-ready: dark colors, heavy leathers, and thick furs abound. (There's no footage of Missandei, but we assume she's ditched the crop top.) As we were told in Season 6: Winter is here. The characters are all dressing accordingly.

The King in the North continues to wear his signature furs.

She's ditched her light and airy blue garbs for a fur-lined dress with a chain and maroon cape.

The Queen of the Seven Kingdoms wears her new crown and a gunmetal grey gown with embellished shoulder pads, which is similar to what she wore in the Season 6 finale.

She copies Jon Snow's fur layering trick for a grey ensemble complete with a chain and leather straps. Winterfell does get chilly.

Last time we saw Arya, she was killing off Walder Frey. Now, her leather and fur ensemble hints she's made her way further north, with her sword Needle, of course.

The youngest surviving Stark sports scraggly brown fur and some sort of burlap to keep him warm north of The Wall.

The deep royal red and black leather are a fine match for the golden fake hand.

Perhaps all that time with Daenerys has influenced him to take on some blue. He also wears his new Hand of the Queen brooch on his striped leather top.

In his classic shaggy Wildling gear.

Going for a distressed quilted look.

Bran's beloved caretaker makes a surprise appearance in the video! Does that mean he's still alive in the seventh season? Or did HBO just want to squeeze in a bit of nostalgia for their latest commercial?

Advertisement - Continue Reading Below
More From Culture
The Best Korean Dramas to Get You Hooked
The Best New Music of 2020 (So Far)
Advertisement - Continue Reading Below
Listen Up: Gripping New True Crime Podcasts
'The Bachelor' Has Already Finished His Season
Unmissable Horror Movies Coming Out This Year
Who Is 'Bachelor' Peter's Mom Talking About?
Sarah Coffin Might Be a 'Bachelor' Frontrunner
Who Is 'Bachelor' Contestant Victoria Fuller?
Meet the Star of 'The Bachelor's ChampagneGate
Jurnee Smollett-Bell Is a Real Life Superhero