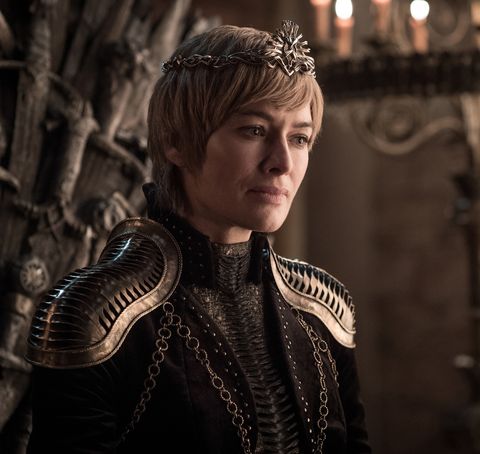 This post contains spoilers from episode one of season eight of Game of Thrones.

How are we all feeling after last Sunday's season 8 premiere of Game of Thrones? Excited? Terrified? Confused? Yeah, all of that sounds about right. The first episode of the final season started off with a bang, and every second of the premiere was put to good use. With only 5 episodes left in the epic series, HBO made sure to pack in an astonishing amount of plot progress: Jon Snow found out that he's actually not a bastard, the Night King left a scary (understatement) message for the Night's Watch at the Wall, Bran Stark stared at literally everyone in Winterfell, and Cersei Lannister slept with Euron Greyjoy.

That's right; Cersei and her deep-conditioned but still crooked wig got the business, courtesy of the drowned god himself.

Euron; They were lesser men

You know what, though? I don't even blame her. Euron was definitely throwing around the Westerosi equivalent of BDE—I legitimately choked on my drink when he said, "Do I please the Queen?" Whew. He may be evil and, but that's a man right there. Mutton chops and all.

The new dynamic in their alliance comes after Cersei put out a bounty for Tyrion and Jaime's heads. She's never been fond of Tyrion, but Cersei wanting Jaime dead is a huge deal. He was (RIP Tommen and Myrcella—not you, Joffrey) the father of her children and the love of her life, so Cersei's change of heart is startling, as is her willingness to actually take her relationship with Euron to the next level. The illegitimate king of the Iron Islands has shown that he is ruthless when it comes to what he wants, murdering his brother and attacking his niece and nephew for the throne. We thought Cersei was just playing about joining forces with him, but last Sunday's episode proved otherwise, all but confirming the fan theory that she's well on her way to becoming the Mad Queen.

Euron might have promised to "put a prince in [Cersei's] belly" (don't threaten us with a good time, sir), but isn't she already pregnant? Last season, Cersei informed Jaime that they were expecting another bundle of joy, and she was abstaining from drinking alcohol because of that fact. However, we also just saw her casually sipping from a glass of Caymus in the throne room. Could she...have lied?

Beyond that being so typical of Cersei, it would make a lot of sense. Think back, if you can, to season 5, when pre-teen Cersei visited Maggie the Frog in the woods to get her fortune told. The witch saw three things in her future:

At this point, Maggie the Frog is 3-0. Cersei did in fact marry King Robert Baratheon and became queen of Westeros. Margaery Tyrell replaced her as queen when she married Tommen, and all three of Cersei's blond children met an early death. The fortune only mentions three children in her future, so it seems impossible for the queen to be pregnant. But what if the prophesy was only speaking about the children that would make it into the world alive?

In the Game of Thrones books, Maggie throws in another prophesy, free of charge: Cersei will be choked to death by the valonqar, the High Valyrian word for "little brother." Naturally, Cersei suspects Tyrion (she literally cannot stand this guy), but there could be other culprits afoot. Jaime, her paternal twin, was born minutes after her, so he could be the valonqar. Big Daddy Euron could also be the valonqar—he isn't Cersei's little brother, but he was the younger brother of the late Balon Greyjoy. You know who else could be the valonqar? Arya Stark. High Valyrian language was pretty progressive, so the gender-neutral "valonqar" could even mean "little sibling." How poetic would it be for Arya to finally get to cross of Cersei's name off of her kill list?

At this point, though, we can't be sure of much besides the fact that Cersei and her maybe-baby are probably going to die. Unlike the deaths of other GoT characters (luv u, Robb), I'm not particularly sad about this one, but until then, please pass the popcorn.

The final season of Game of Thrones airs every Sunday night on HBO.


This content is created and maintained by a third party, and imported onto this page to help users provide their email addresses. You may be able to find more information about this and similar content at piano.io
Advertisement - Continue Reading Below
More From Culture
Talk Race & Friendship With 'We Are Not Like Them'
'The Great British Baking Show' Is Back!
Advertisement - Continue Reading Below
Let's Get to Know 'Sex Education' Newbie Dua Saleh
The 'Squid Game' Ending, Explained
'NPS' Director Just Teased a Second Season
Iconic Fall Movies to Get You in the Spirit
The "Berries and Cream" Trend on TikTok, Explained
Fans Are Already Clamoring for 'Sex Education' S4
What to Watch After You Finish 'Squid Game'
The Best Feel-Good Movies to Curl Up With