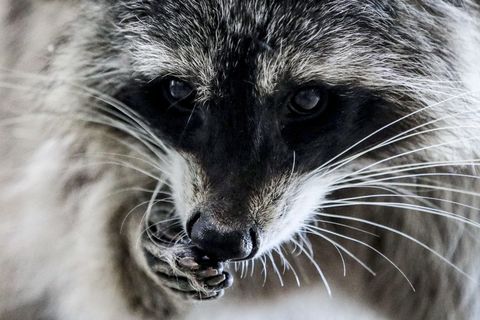 It’s 2019 and I remain confident that the well of dog- and cat-themed social media accounts will never run dry. That the internet is largely made by and for cats is a cliché older than wanting to haz a cheezburger, and the desire to pet soft dogs has become an easy substitute for actually having a personality. (I do it, you do it, it’s fine!) In fact, canines surpassed felines last year as the web’s favorite animal, long may they reign.

But lately, something weird has been happening to me. I’ve become really into, like, woodland creatures on the internet? I’m talking possums, raccoons, the occasional squirrel. I’m not sure if meerkats count, but since they’re basically striped desert weasels I’m going to assume they do. I think rodents (and marsupials, in the case of possums) are cute now, and when I’m feeling stressed I find it helps if I look at short videos of real chunky raccoons jumping up and down. Observe:

I can’t triangulate exactly when this happened but I think I blame Poppy, the iconic rescue possum who resides at the Folsom City Zoo Sanctuary in my hometown. Since the zoo is purely for rescue purposes, all the animals there are things you’d find around Folsom and the Greater Sacramento Area, like coyotes and deer and bobcats and skunks. Basically, it’s a zoo dedicated to things you might accidentally hit with your car, and it's actually better than Disneyland.

When my mom started working there a few years ago, I followed their Instagram to be supportive, and it turns out it’s actually very good content! But the best content of all is my beloved Poppy. Look at this gem:

Say hello to Poppy. Poppy the opossum was born last year in April. She was found with her eleven siblings after her mother had been hit by a car and killed. The young “joeys”(baby opossums) were severely dehydrated and overheated. Sadly Poppy was the only one that survived thanks to the special care of rehabber Sandy Doolittle of Bidwell Wildlife Rehab. On the brink of life and 23 grams, Poppy had to be handled more than normal and became imprinted which, unfortunately made her non-releasable. Poppy loves to snack on grapes but has a distaste for cauliflower. She has an allergy to straw/hay and is recovering from some bald patches on her torso due to the allergy. Poppy is eating well and in time might join our educational ambassadors for spot talks and outreach.

She was rescued when her mom was killed, and was the only one of her siblings to survive. She shares her enclosure with her partner, a skunk who paints:

Funk the skunk created a painting during the opening art reception. There is still time to view the paintings in the gallery. "Lions, Tigers and Bears" Paintings by the animal “artists-in-residence” at the Folsom Zoo Sanctuary. On display in the Community Gallery at The Gallery at 48 Natoma from March 8 through April 26. All proceeds from the animal paintings directly benefit the animals at the Folsom Zoo Sanctuary. On display in the main, Gallery at 48 Natoma. “Three Women Photographers” March 15 through May 2 Featuring photographs of horses by Mary Aiu, wildlife photography by Lynne Edwards, and landscape photography by Ruby Pacheco. Gallery Hours: Monday–Friday, 9 a.m.–5 p.m.; Open Tuesday and Wednesday evenings 6–8 p.m.; and the second Saturday of each month, 9 a.m.–1 p.m. All exhibits are free and open to the public. Free school, group tours arranged by appointment. Photos by zookeeper Shawn.

I’d characterize them as kind of the Folsom rodent equivalent of Patti Smith and Robert Mapplethorpe, but my mom has yet to respond to my text for comment on this. I didn’t even know I liked possums until Poppy, but it turns out I’m not even alone in this. In fact, she’s become something of a celeb in Folsom.

Eventually, The Algorithm caught onto my interest and soon my Instagram Discover page was a lot of fluffy, chunky raccoons and possums. It was, frankly, reassuring to know that there was an entire community of people who also find these things cute.

And so I’m going to say it: I think woodland creatures are about to have their moment. And if you’re not convinced yet that possums are the new dogs and that raccoons should launch a 2020 exploratory committee, I’ve collected some of the best accounts on social media to help you change your mind.

Here’s an Instagram account with over 10,000 followers for a raccoon cafe in Daejeon, South Korea, where I hope to spend my future honeymoon:

Another icon is Gilbert the Possum, who has amassed 77,000 followers on Instagram, and who is bafflingly cute:

And sorry but if you're not one of the 614,000 people following Jill the Squirrel on Instagram, you are squandering the gift that is the internet:


If you’re into another Poppy the Possum, there’s this one who lives with a human and occasionally bullies the resident cat.

And then, of course, there’s Pumpkin. This racoonfluencer with over a million followers lives in the Bahamas and is somehow well-behaved enough to cohabit with children, several dogs, and a white couch. I’m not even housebroken enough to keep a white couch clean and I went to college!

Happy international women’s day! To all the amazing women out there that have helped shape the world we live in today. To every badass lady that is making this strange planet better for my daughter and future generations. And to these three little ladies in my life, what a motley crew you are and I love you! ❤️

Are these animals popular now because, in a year in which the dominant white man once again controls everything and it all seems to be getting a little worse, we might collectively want to root for an ugly-cute underdog who is gentle and loves trash? I honestly can't speculate. But I am thrilled to announce that raccoons and possums are in for spring 2019. We did it.