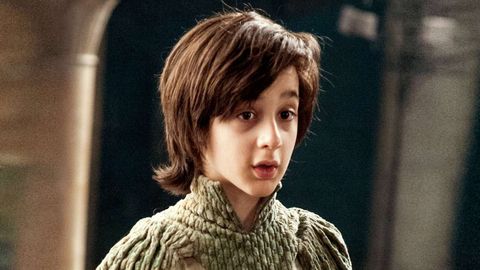 Wow wow wow. Game of Thrones ended its watch on Sunday night with an episode that was bound to please nobody—so much going on!—but certainly wrapped up plenty of the show's crown drama. After Jon Snow killed his aunt/lover Daenerys Targaryen, he was sent back to the Night's Watch. (A little confusing...is there still a wall? Anyway.) Tyrion Lannister persuaded a council of Westeros' remaining leaders that Bran "the Broken" should take the throne, and they duly agreed. Sansa Stark declared the North independent, and remains the queen. (She looked great.) Jon's direwolf Ghost finally got a moment in the sun. Plus, Bronn, Sam, and Ser Davos all get to serve on the king's council. Imagine!

Amongst all of this, it might be forgiven if you missed a few details. But one eagle-eyed viewer caught something that might interest long-time fans: one character who made an appearance after a long time out of the show. Robin Arryn, best known for loving moon doors and being breastfed for a number of years by his terrifying mother Lysa, was present at the council meeting where the nobles decided who would be the ruler of Westeros. And he looks very different now! All grown up!

Why is nobody talking about this glow up wtf #GameOfThrones pic.twitter.com/ex6W0MgPdL

shoutout yung arryn, for someone we first saw breastfeeding at age 8 he seems to have turned out ok

I would just like to point out that THIS kid got a seat at the table to vote for the President of Westeros.... #GameOfThrones #DemThrones pic.twitter.com/lbn7iHD5t2

Robin is played by Lino Facioli, who has also starred in Get Him to the Greek and, most recently, a short film called Isha. Born in 2000, he would have been just 11 when he first appeared in the first season of Game of Thrones. His last appearance on the show was in episode 4 of season 6. Now he's big, and voting for kings, and stuff!

Robin's appearance was a good reminder that while all of this political intrigue has been playing out, the rest of the Seven Kingdoms' denizens were doing their own thing. But one big question remains, for some:

I mean, sure, they concluded most storylines in a fitting manner that was both emotional and rational. But they didn’t answer the biggest question: Does Robyn Arryn still breast feed?!

Answer my questions, dammit! Burn it down! #GameofThrones

Related Stories
Did Jon Snow Become King of the Wildlings?
What Will Arya Do Now Sansa Is Queen of the North?

Estelle Tang Senior Editor Estelle Tang is the Senior Editor covering culture and entertainment at ELLE.com—including TV, movies, books, music, and Adidas tracksuits.
Advertisement - Continue Reading Below
More From Culture
'Good Girls' Is Back for an Explosive Season 3
Netflix's 'Haunting of Hill House' Will Return
Advertisement - Continue Reading Below
Criminal Minds Season 15 Will Be Its Last
The Hot New Podcasts to Add to Your Queue
Who Are the Women of 'The Bachelor' in 2020?
Join Marie Claire's Virtual Monthly Book Club